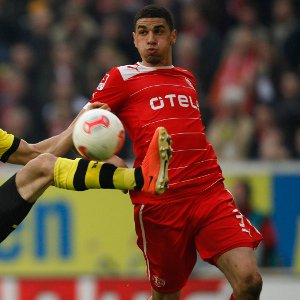 Fortuna Dusseldorf of Germany defender Leon Balogun has exclusively revealed to supersport.com his deep desire is to play for Nigeria

” I will walk to Spain, then swim across the ocean, catch a canoe just to honour the call. It will be the pinnacle of my career to represent the country of my father’s birth especially because my father was always proud to be a Nigerian” Balogun told supersport.com

Balogun was in the Dusseldorf side that were relegated from the Bundesliga last season where he started half of the matches.”

“It was not a good feeling but Bundesliga 2 is as strong as many first divisions in other European countries and currently we are improving and hopefully should be able to bounce back.”
Back to his international ambitions. Asked on what he makes of those who say that he is hoping reap where he had not sown with regards to a world cup place.

“Nobody called me. Nobody came to watch me play during the qualifiers. If they had, I repeat I would have jumped at it and would have contributed my quota to the course”

One of the most fascinating things about Balogun is his fluency in English considering that he has never visited nor lives in an English living country.

“I taught myself mostly because I have always liked to speak the language. I listened to music, I watched films and TV programmes and then added to the classes in school”

The former Weder Bremen defender believes that central defence is his best position. “I have been playing most of my matches now as a right back for Dusseldorf but central defence is where I have originally always liked. However, maybe because of my speed especially on my offensive and my crossing have made my coach prefer playing me at right back”

Balogun is a rare breed of footballers in his humility and even the car he drives “My parents taught me to be content with what I have and where I am. They grounded me properly so that material things are not so important” He does not have arrogance about him and explains why he never got capped by German youth teams “maybe I was not good enough at the time. I will never say that when I was growing up through the ranks that my game would have stood out enough then. Am not hung up on that at all.”

Many would have expected him to have moved away from Dusseldorf after the relegation. He sees it a bit different.

“I play more now at this club. More than I did at Bremen so I will rather be playing football regularly at my age instead of sitting on the bench at a big club side.”

Final word to Keshi? “I will make the life of every forward that comes up against me miserable throughout the match. I will guarantee 100% commitment to the cause and I am firm believer in team work. Offensively and physically am powerful enough. I have the speed for the position. I will be honoured to be given just a trial.”