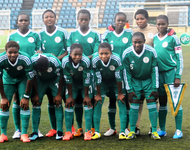 The Nigeria Football Association (NFA) has expressed satisfaction with the draw of the FIFA U-17 Women’s World Cup that pitched the under-17 national team with Mexico, Colombia and China PR.

NFA’s Chief Technical Officer, Abdulrafiu Yusuf, said on Friday in Abuja that the draws were a good one for the team known as the Flamingoes.

The draws were held on Dec. 17 at the Antigua Aduana, San Jose, Costa Rica.

It is for the fourth edition of the FIFA U-17 Women’s World Cup billed to hold in Costa Rica from March 15 to April 4.

“The draw is a good one for Nigeria because we have an Asian team and two South American teams there and I don’t think the South Americans will give us a problem.
“It is only China I see that might want to prove a little bit hard because they pace well; but we have players on ground to douse their threat,’’ Yusuf said.

He, however, noted that though the team did not play any qualifying match to test their strength, they had no cause to worry.

The team qualified automatically for the World Cup without playing any qualifiers after South Sudan withdrew from the African qualifiers.

“Luckily for us, we still have about four or five of the players that were in the 2012 edition who made the team.

“So, we will use them as the base of the team to build the other players around them,’’ Yusuf said.

That Flamingoes crashed out of the 2012 edition in Azerbaijan in the quarter-final stage after losing to France 3-5 on penalties.

“They will resume camp on Jan. 6 and will remain in camp all through, till they go for the tournament.

“Also, there are local and international friendly matches being organised for them and there will be an eight-nation tournament coming up in February.

“So, that we are hopeful that the practice will herald their better performance when the tournament starts proper,’’ Yusuf said.

However, Coach of Kogi United FC, Fatai Remo advised the NFA to ensure that the team had adequate preparation.

“Thank God, we are not facing the consequences of appointing the coach late; this is probably due to the fact that we are a power house in female football in Africa.

“But it will be a different ball game on the World stage, so we need to put a lot of effort into the team’s preparation.

“I think we will be able to scale through from the group after which we will pick up from there,’’ Osho said.

A sports journalist, Rilwan Abdusalam, said that with good preparation and exposure to friendly games, we should be confident that the team would be able to surpass its previous feat.

“We have been able to up our game in that category at the 2010 and 2012 editions, unlike at the inaugural edition in 2008 when we just went there to complete the numbers.

“This shows that we have improved a bit over the years and looking at the draw and the records of the teams we have been drawn with, China is the only country that can match our pedigree.

“This is because they are respected for their fast pace football and their strength and stamina level at that age category cannot be compared to any other team in the group.

“But with good and early preparations and exposure to friendly matches, I see our girls surpassing our quarter-final record,’’ Abdulsalam said.

The World Cup will be played across four stadia, three in San Jose and one in Liberia, from March 15 to April 4.

Nigeria will start its campaign at the mundial on March 16 against China PR and face Colombia on March 19, both in San Jose.

The Flamingoes will play their last group match against Mexico on March 23 in Liberia, to finish the first round of the tournament.