A Rapist Blames His Victims 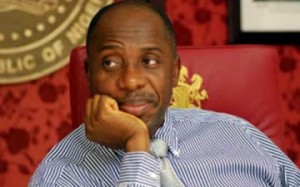 Many a time, when a male rapist is apprehended, he mischievously blames his victim for his conscienceless manhood. He mouths inanities like, “She made me do it because of the way she was dressed”, or, “I did it to teach her a lesson.” Or, “her body was irresistible.”

Most rapists blame their victims’ dressings, conduct, body, outlook, manners and, over all, personality.

I borrow the analogy of a rapist to illustrate the impertinence of Governor Chibuike Amaechi of Rivers State who was widely reported to have said, barefacedly, this past Saturday, that he –and the rest of the political elite he belongs to – steal because Nigerians do not stone them. In other words, the thieving gang that makes up Nigeria’s political class would not steal if their victims were not so passive. How simplistic and unfair an assessment!

We must note that this is not the first time Amaechi has blundered in his faux-advocacy against corruption. And that his “vision” is always preceded by public fallouts with his bellicose peers. In April, he said Nigerians were too timid for a revolution. His Arab Spring generalisation was consequent of his tiff with President Goodluck Jonathan. This December -having successfully “revolted” from the Peoples Democratic Party to the All Progressives Congress but still having running battles with the Supervising Minister of Education, Nyesom Wike’s acolytes- he expostulated the same logic; again, everything is false.

If we merely high five Amaechi for his simple-minded statements, he will continue to ejaculate his guilt conscience on our already battered bodies. No, this is an obscenity that merits censure.

We need to tell Amaechi –and everybody he codified into his “we” when he made the statement- that they steal because they are contemptible thieves; vile souls destined for perdition.

What Amaechi is saying is that politicians steal because that poor pregnant woman who might become a maternal mortality statistics in the next few weeks has yet to cast a stone at them; Amaechi posits that politicians steal because thousands of children whose lives have already been shortchanged by successive governments of Nigeria and who walk around ill-equipped for any decent future are not threatening him with stones; Amaechi says he is a thief because people leave their doors open for wheeler-dealer politicians like him to walk through; Amaechi is blaming the poor and deprived people of Rivers State who cannot even gain access to where he displays his majestic opulence for allowing him spend their money on a private jet.

If Amaechi thinks the average Nigerian is so passive and will never stone their thieving leaders, why does he -and other loathsome politicians- invest so much money on security? Why can he not walk the streets of Port Harcourt in the afternoon and see if he would not be stoned? In better countries of the world, politicians ride in public railway system along with common people without the fear of being stoned. Why cannot Amaechi do the same if he is confident about Nigerians’ docility?

Amaechi’s backers will plead he is speaking the truth about the attitude of Nigerians. To a large extent, they might be right to say Nigerians do not display enough civil vigilance to keep political office holders on their toes. Undeniably, the average Nigerian does not show enough outrage at the numbing degree of impunity that goes on in our so-called corridors of power. From the corruption inbuilt into the continued fuel subsidy scheme to the recent revelation by the Central Bank of Nigeria Governor, Sanusi Lamido, that the Nigerian National Petroleum Corporation has “stolen” a whopping $50bn of oil earnings, Nigerians have not done enough to engage their leaders.

There is some truth to the fact that we are easily trampled because, well, we are either high on hope-dope injected straight into our brains by organised religion or we are simply weary of pushing because previous efforts had led nowhere.

But has Amaechi asked himself why the same Nigerians who fought the military governments have largely grown colder than ice water and do not exhibit fearless agitating spirit anymore? Could it be they are tired and they do not see any difference between options? I mean, what is the point of stoning the PDP when the APC –and the other locusts who may take over from them- are no better?

Has it occurred to Amaechi that what he called timidity is one of the (dis)advantages of democracy?

Democracy tends to attenuate citizens’ revolutionary zeal because its institutions ensure citizens do not have to resort to bringing down the entire system each time things are not going their way. That is a lesson Egyptians had yet to learn when they stormed the streets and deposed President Mohammed Morsi.

Amaechi seems to be positioning himself as the lone voice of conscience in the Nigerian wilderness but we are not fooled. He seems to have read the playbook of former president Olusegun Obasanjo –Nigeria’s original Dr. Jekyll and Mr. Hyde. Obasanjo has a similar incredible ability to play multiple personalities in the same drama. He can stand at the ruins of the house whose faulty foundations he laid whilst yelling, “Repent, for the Kingdom of God is at hand!” He does this without, surprisingly, being weighed down by the irony of the whole affair. One could say the same of Amaechi who, shortly before decamping to the APC, began hollering vociferously at the Minister of Finance, Mrs. Ngozi Okonjo-Iweala, over corruption. As if he suddenly woke up one morning and found that Nigeria was corrupt.

If he had not been a beneficiary of corruption, Amaechi would have made sense. But as a member of the corrupt ruling class who has neither given up his own position nor made any restitution, he needs to shut his mouth. And, fast too. Barking at repressed Nigerians will not do any shred of good. This cloying behaviour not only divests him of personal and moral responsibilities to the people he pretends to govern, it is shamelessly hypocritical. If you need to be stoned to do the right thing as an elected administrator, why then do we have to have a democracy?

[Opinion] Is The CBN Governor Stupid

Iyabo Obasanjo’s ‘Letter to my Father’ By Idang Alibi