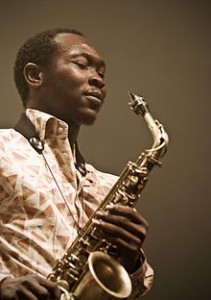 Oluseun Anikulapo Kuti also known as Seun Kuti, a Nigerian musician, and the youngest son of legendary afrobeat pioneer Fela Kuti has called on Nigerian female students to name and shame lecturers that demand bribe and sex for grades.

Seun who took to the social networking site, twitter said now that lecturers have been paid their entitlements by government, no Nigerian student should be subjected to humiliation for grades.

Writing in pidgin English to his 27 thousand plus followers, ?@RealSeunKuti condemned the trend where young under graduates in Nigerian universities will continue to suffer sexual harassment by lecturers.

He wrote “Abeg if una agree with me, make we start 4rm now, twt/facebook any lecturer wey ask 4 bribe 2 pass exam or ask 4 sex b4 u pass exam, NO FEAR”

He called on his followers who have been abused by lecturers to come forward with evidence.

“no just come report lecturer bcus u no like him/her o.”

Condemning the rate at which undergraduates are molested and harrased by lecturers, the activist added “we need to stop all d rubbish going on for naija uni”

So now wey una don get part of una money, we niaja youths(Students) demand Change in our uni system too”
One of Seun’s followers went ahead to suggest that a website be created to name and shame the lecturers with photos and videos.

“I’m With U On This! Maybe We Can Design Website Where Students Can Dump Pictures/Videos Evidence.#SaveOurPublicUniversities ”

When one of the followers suggested the National Association of Nigerian Students to help compile the names of female students willing to come out and names of lecturers guilty and demand punishment.

The Academic Staff Union of Universities had on Tuesday called off its over five months old strike after deliberations that started on Monday morning and lasted till the early hours of Tuesday.

The Union’s President Dr. Nasir Fagge, told journalists at the press briefing, which held at the Science Complex building of the Federal University of Technology, Bosso Campus, Minna, Niger State, that it accepted the resolutions signed between ASUU and the Federal Government on the 11th December, 2013 with the President of Nigeria Labour Congress.

How Much It Costs to Look Like Kim Kardashian