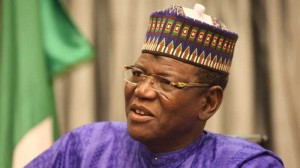 The People’s Democratic Party has been misbehaving and if it continues to misbehave in this way, the All Progressives Congress would take over the country in 2015 says the Governor of Jigawa State, Sule Lamido.

Lamido said he can now see the wisdom in the formation of the APC; since the PDP is really misbehaving, the party will give PDP a good fight in the forthcoming election.

The prediction coming from a ‘rebel governor’ of the PDP is at a time the lingering crisis in the ruling PDP continues to provide opportunities of advancement for the newly merged party.

According to him, the formation of APC democracy had been made more vibrant in the country.

Speaking when he received the leadership of the Kano and Jigawa chapters of the Nigerian Institute of Public Relations (NIPR) when they paid him a courtesy visit at the government house.

Lamido with two of his sons arrested for fraud in the tune of 10 billion naira said, “I was amongst the G-7 governors for a certain ideology we shared, yet I was called names. I was called the black sheep from the North, I was called anti-North in the past, because of what I believed in,”.