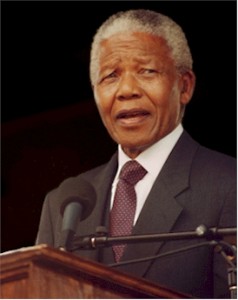 Gov. Babatunde Fashola of Lagos State on Monday said that Nigeria deserved respect for the leading role it played in ending the apartheid regime in South Africa.

Addressing newsmen on the death of Nelson Mandela in Ikeja, Fashola said the country made huge sacrifices to free South Africa from the pangs of apartheid.

He said it was ironical that Nigerians faced daily harassment in South Africa, while those who enthroned apartheid got more respect in that country.

Fashola also wondered why those who promoted the suppression of black South Africans through the policy were the same people now celebrating Mandela the more.

“Tribute to Mandela, either during his life or after his death, cannot really be too much.

“We are privileged to share this planet with him. But then, there are more questions than answers.

“When you look at the part of the world where ovation is now the loudest, it was the part the pain was the most vicious. In a very cruel irony, history is being revised.

“The people, who collaborated with the government that enthroned apartheid at that time, are the people that are paying the biggest tribute now.

“But I ask myself: is this not the time for deep reflection? I doubt if any African country expended as much time, as much money and as much commitment as the Nigerian Government.

“I was a teenager then in 1976 when anti-apartheid campaigns really gained resurgence in every home in this country.

“Nigeria paid a huge price for what South Africa has become today. I remember the anti-apartheid campaign was at the core of Nigerian foreign policy.

“I remember we did not go for a particular Commonwealth Games because of South Africa.

“I remember we took drastic measures against the foreign collaborators of apartheid regime and nationalised assets.

“But the tragic irony is that we are the ones being driven out of South Africa. The British can enter South Africa. We have to take a visa.

“These are deep questions because they hurt me. And we have to do something about the situation.”

Fashola urged the Federal Government to take urgent steps to reposition Nigeria as a leading and respectable voice in the continent.

The governor described Mandela as one of the greatest leaders the world had ever had, saying he would be missed by all.

He urged leaders to learn from the legacies of the former South African leader, charging them to put their best in the service of their people.

The News Agency of Nigeria (NAN) reports that Mandela, the first black president of South Africa died on Dec. 5 at the age of 95.

He would be buried in Qunu, his hometown on Dec. 15