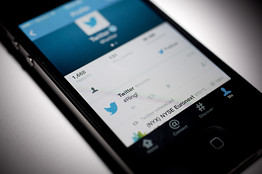 A Twitter Inc. tweet regarding the company ringing the opening bell on the New York Stock Exchange is displayed on an Apple iPhone. Bloomberg News

In a move to give more people access to tweet, Twitter Inc is tying up with a Singapore-based start-up, U2opia Mobile, to make its 140-character messaging service available to users in emerging markets who have entry-level mobile phones which cannot access the Internet.

Chief Executive and Co-founder Sumesh Menon of U2opia Mobile said its Twitter service would be launched in the first quarter of next year. To make this possible, user will need to dial a simple code to get a feed of the popular trending topics on Twitter.

U2opia, which is present in 30 countries in seven international languages, uses a telecom protocol named Unstructured Supplementary Service Data (USSD), which does not allow viewing of pictures, videos or other graphics. “USSD as a vehicle for Twitter is almost hand in glove because Twitter has by design a character limit, it’s a very text-driven social network,” Menon said.

According to Menon, eight out of 10 people in emerging markets are still not accessing data on their phone; “for a lot of end users in the emerging markets, it’s going to be their first Twitter experience.”

At the moment, more than 11 million people use U2opia’s Fonetwish service, which helps access Facebook and Google Talk on mobile without a data connection.

In Nigeria, U2opia mobile tied a deal with MTN Nigeria in October 2013, to introduce a simple and inexpensive way for mobile users to access Facebook without any Internet or data connectivity.

The company, whose biggest markets are Africa and South America, partners with telecom carriers such as MTN, Telenor, Vodafone and Bharti Airtel Ltd.