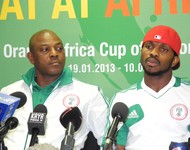 The Head coach of the Nigeria national team, Stephen Keshi said Argentina versus Nigeria is something that is becoming a recurring decimal.

Coach Keshi who reacted to the Super Eagles’ three group opponents at the 2014 Fifa World Cup finals in Brazil after the draws said Nigeria keeps playing against Argentina at every World Cup.

“It’s good. We will see how it goes this time,” . Nigeria will be meeting Argentina in the preliminary stage of the competition having failed to avoid defeat in the three previous encounters in 1994, 2002 and 2010.

Speaking on the group’s two other sides, Bosnia-Herzegovina and Iran said.

“Not knowing Bosnia is a difficult thing but they are a good side. I think I’ve seen them once or twice on television.

“Iran? I’ve never seen them. For them to be here means they are a good team,” he added.

Nigeria’s first game at the 2014 World Cup finals is on June 16 against Iran at Arena da Baixada, Curitiba.

The Super Eagles have never gone beyond the second round of a World Cup.

Keshi Is Focused On CHAN For Now And Not World Cup

Brazil 2014 World Cup Draws Over, See Who Faces Who