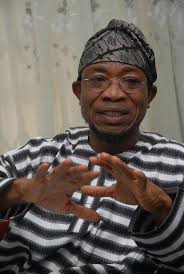 Comrade Bankole Afilaka, the chairman, of the caretaker committee of Labour Party in Osun State spoke on the pace and pattern of politics in Osun State. Excerpts:

What are the plans of the Labour Party for the 2014 Governorship election in Osun State?
I think at this point, the Labour Party is working assiduously towards getting the best candidate. We have had some people coming to us and expressing their interest and some have not come to us but have expressed their interests on the newspapers.
For us, our assignment is on behalf of the Osun people to get the best candidate that would be the actual alternative and real change in Osun. Change in Osun is in many dimensions, we want unencumbered leadership, and we want the kind of leadership where the people can relate directly, we want the kind of leadership that would be honest in delivery of public policy. We condemn out rightly the idea in which government of the day use to oil propaganda machinery.

For instance, if you go around, you look at the entire state and it’s almost branded with Aregbesola’s face, we are still surprised that the INEC have not called him to order and we have written another petition and we are hoping that INEC will look into it as a matter of urgency. We want the best candidate for Labour party on behalf of the people that will deliver the dividends of democracy to the masses of Osun state, not somebody that will mortgage the state and mortgage it for the generation to come and then use some kind project to daze us through a propaganda-drive that is unprecedented in the history of politics in Nigeria. For us in Labour party, what we want to do in 2014 is to unseat Aregbesola and I can tell you as a matter of fact, Aregbesola is gone already; it is just a matter of time.

Does your party have what it takes to dislodge him?
I can tell you as a matter of fact that Labour party is the only party that is going to remove Aregbesola and he (Aregbesola) knows this.
Aregbesola thinks he is giving us development but what he has given us is something to help push his own image. As you can see, his face is everywhere and I would not be too surprised if the face is found in your bedroom because that is what he is all about but we want government not propaganda, I think this is a fundamental difference between our party.

To what extent have you been able to resolve the internal crisis that rocked your party?
That has been put to bed. The reality of the matter is that the court struck out the Aregbesola instigated court case.
We are receiving a large influx of people across the state but more importantly, we believe strongly that the government of Osun State is a danger to democracy. Why do we say that? He is beginning to give the state a bad name by exporting large elements of our state to go and cause electoral anarchy during Anambra gubernatorial election. We warned of this during Ondo state election that he was sending thugs to Ondo state.
Now he has been caught in the act; we know that those boys were working for a known Aregbesola’s apologist in Osun State.

He was the one chairing a group of about 183 that was supposedly registered in Lagos with guns and fake ballot papers (for the Anambra election). This is a disgrace to our state and its time we condemn it. Aregbesola is a danger to democracy; the government needs to put him on security watch with immediate effect. Somebody that is exporting thugs elsewhere to go and fight an election that doesn’t concern him, what do you think is going to do when Osun comes to 2014?

Related Topics:APCelectionsOsunRaufLabour Party
Up Next

My Fan Base Grew After The Sex Tape – Chidinma