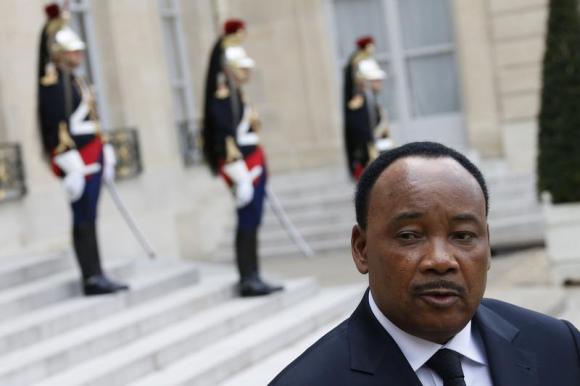 Libya risks becoming a failed state like Somalia, Niger President Mahamadou Issoufou said on Friday, a day after gunmen shot dead an American teacher in the eastern city of Benghazi.

Niger, which adjoins Libya to the south and has fought Islamists at home, wants to reinforce military ties with Western partners and neighboring states as al Qaeda-linked militants regroup in southern Libya after French-led forces ousted them from Mali this year.

“Our fear is that Libya falls into the hands of Salafist terrorists and that the state becomes like Somalia,” Issoufou told reporters ahead of a Franco-African summit in Paris.

“Sadly, we’re seeing that the terrorists are there and that armed Salafist militia are in Benghazi, with people being killed almost every day. We must stabilize Libya.”

Gunmen shot dead an American teacher working in Benghazi on Thursday more than a year after Islamist militants stormed the U.S. consulate there, killing the U.S. ambassador and three others.

Libya’s fragile government is struggling to contain former fighters and militants who, two years after the fall of Muammar Gaddafi, are challenging a fragile state that is trying to build a national army with Western aid.

Issoufou, whose country has seen a string of attacks this year, including on a French-run uranium mine, said there was no time to lose for countries in the Sahel desert region to pool their resources to create “mixed brigades” that could enter each other’s countries to combat Islamist fighters.

Regional rivalries have aggravated the problem with a lack of cooperation between Saharan countries helping militants to melt away when they come under pressure and regroup in quieter parts of the vast desert.

“We talk a lot and act very little,” Issoufou said. “We (Niger) are fighting to create an organization that brings together Sahel countries so that solutions are in place to face our common (security) difficulties,” he said.

“We have to bring together the means of different countries so that there are mixed brigades on frontiers such as on the Libyan border. I’m optimistic.”

Niger has already reinforced its border patrols with an additional 3,000 troops and Issoufou said his priority was “to lock” Niger’s borders to prevent Islamists and traffickers from crossing its territory.