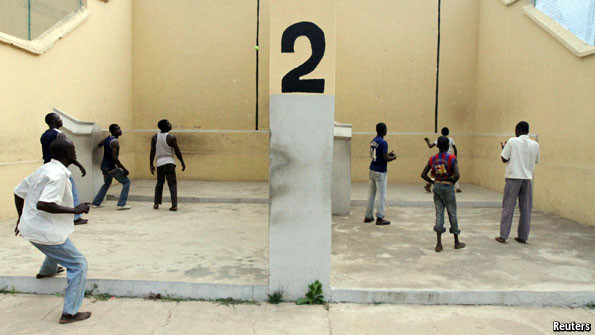 AS THE sun sets in Kano, a city in northern Nigeria, four men shoo goats and chickens off a three-walled court modelled on a space on the side of the chapel at Eton, the English boarding school. Stripping down to immaculate white vests, the men bounce around for a game of Eton Fives.

This quirky form of handball did not spread much beyond a small English elite that includes several prime ministers and members of the royal family. But it did make it to the southern fringes of Sahara desert, where it won mass appeal.

“The game is played all over Nigeria and attracts large crowds,” Yusuf Yakadu, the chairman of the Fives Association in Kano explains, while keeping a beady eye on the court. Mr Yakadu started playing in secondary school in 1972 and together with school friends he plays in the dusty open-air court every week.

J.S. Hogben, an Old Etonian who taught in Birnin Kebbi in northern Nigeria, introduced the game in 1928 and it has continued to gain local popularity ever since. “In December we are hosting a tournament where up to 20 Nigerian states will participate. It will be like a festival and will attract many people,” Mr Yakadu says.

In England, the game reached its heyday in the 19th century. Roald Dahl, the author, described it as “possibly the fastest ball game on earth…the little ball ricochets around the court at such a speed you can hardly see it. You need a swift eye, strong wrists and a quick pair of hands.”

In England, players wear custom made padded gloves to smash a hard ball around the three-sided court with a buttress on one side to replicate the space between the buttresses on the outside of the chapel at Eton College built by King Henry VI.

When Mr Hogben first introduced the game to Nigeria almost a century ago, he was alarmed that the hard ball took chunks out of the mud walls of the courts and ever since Eton Fives has been played with a tennis ball by the locals.

Courts vary in shape and size. Players often begin as ball boys. “A lot of government ministers in the north played it in the past and the Emir of Katsina has his own court. But the beauty of the game is that people from all walks of life can play it. That’s why it’s so good and has endured,” says Mr Yakadu.

Article read in The Economist

Related Topics:NigeriasportsKanoNorthBirnin Kebbi
Up Next

Kano Pillars To Buy Enyimba Captain And Striker, Ahead Of Next Season