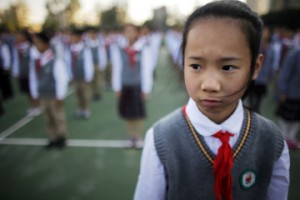 The results from a global exam that evaluates students’ reading, science and math skills are in and, once again, Chinese students appear to be reigning supreme while American students continued to underperform. But Times Magazine believes China is Cheating the world student ranking
it said Enough is enough. The Times reports is asking Beijing to supply national data to assessors and not simply the results of a small minority of elite students. While Americans and the Chinese are competing over who tops the ranking table, where is Nigeria? Asuu strike is ongoing.. Read Times report below, why the Chinese are cheating the system.

But before you shake your head ruefully and scoff at the decline of Western-style education, take a look at how the data is organized.

The OECD’s Program for International Student Assessment (PISA) exams are held every three years. Coming first and third respectively in the 2012 exams are the Chinese cities of Shanghai and Hong Kong.

However, China is uniquely not listed as a country in the rankings — unlike the U.S., Russia, Germany, Australia and other nations judged on the basis of their country-wide performances. Instead, China only shares Shanghai’s score with PISA. (Hong Kong, a Special Autonomous Region of China, sends its own data.)

Shanghainese and Hong Kong students are much better educated than those elsewhere in China. Slate quoted the Brookings Institution’s Tom Loveless as saying that  “About 84 percent of Shanghai high school graduates go to college, compared to 24 percent nationally.” In addition, Loveless points out that affluent Shanghainese parents will spend large sums on extra tuition for the children — paying fees that far exceed what an average worker makes in a year.

By not providing full national data, China is in effect cheating.

As Loveless noted earlier this year, Shanghai’s test scores “will be depicted, in much of the public discussion that follows, as the results for China.” He added: “that is wrong.”

All of a sudden, rote-learning doesn’t look like China’s secret weapon.