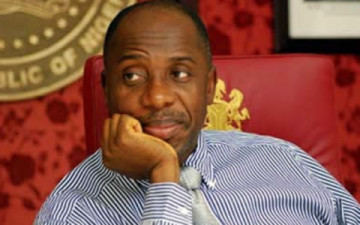 Rivers state Governor, Rt. Hon Rotimi Amaechi has dissolved the management of Obio-Akpor Local Government council. The Chairman of the Local government council, Timothy Nsirim and his seventeen (17) Councillors shall hereby vacate their positions. This dissolution took effect from yesterday; 28th November, 2013. This was announced in a statement by the Secratary to the Rivers State Government, Mr George Feyii. The statement also made it clear that the Governor had acted with the powers conferred on him by the ‘Rivers State Government Law 2012’.

The dissolution of the council is coming barely forty-eight (48) hours after a Port-Harcourt High Court had reinstated the aforementioned local government officials who had previously been dissolved before this latest dissolution. Justice Iyayi Lamikanran had nullified the earlier dissolution because due process was not adhered to in the setting up of a caretaker committee.

In a quick move, the Rivers state Government has made some calculative moves in ensuring that their  decision will not be revoked by the court of law this time as he has asked the dissolved council to hand over to the Head Of Personnel Management this time around and not a  caretaker committee

The Rivers state house of assembly had seven months ago suspended the Chairman, Vice Chairman and Seventeen Councillors of Obio Akpor LGA for issues related to abuse of public funds and breach of security. The house had also frozen the account of the Council. The House had then call on the state Government to appoint a caretaker committee to take charge of the affairs of the Local Government while investigation went on.