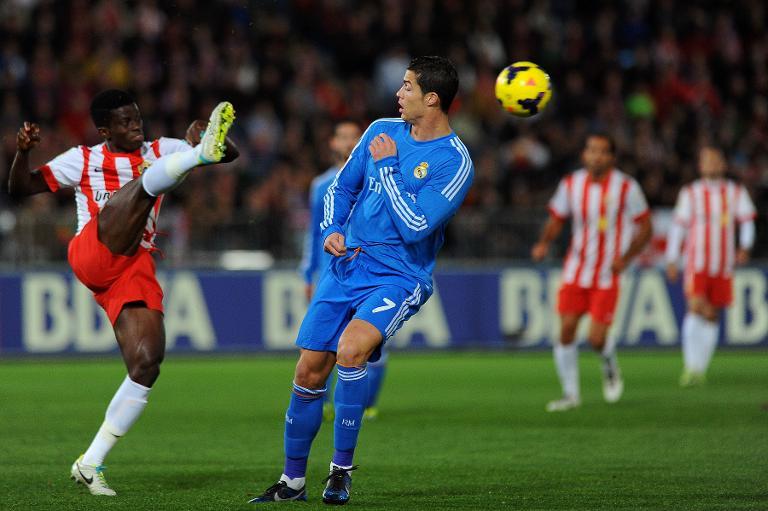 Madrid (AFP) – Cristiano Ronaldo is hopeful he could be fit to face Galatasaray in the Champions League on Wednesday despite being forced off with an injury during Real Madrid’s 5-0 win away to Almeria on Saturday.

Ronaldo had opened the scoring after just three minutes to continue his remarkable form of late.

However, he was replaced be Jese Rodriguez just six minutes into the second period after pulling up with a slight muscle strain.

“It was a precaution. It was nothing special. They gave me a kick in the first-half and I felt the muscle was a bit stiff,” he told the club’s website.

Madrid boss Carlo Ancelotti was also happy that his star man will not be sidelined for long and indicated the full extent of any injury will be confirmed on Sunday.

“I don’t think it is serious because he is not in pain. It is a muscle strain so I hope he will be fine soon,” said Ancelotti.

“Tomorrow there will be more tests, but we don’t think it is a big problem.”

Ronaldo’s injury aside it was another fine evening for Los Blancos, who have now scored 20 goals in their last four league outings.

Karim Benzema doubled their advantage just two minutes after Ronaldo’s withdrawal with a fine curling effort from the edge of the area.

Gareth Bale then registered his fourth goal in five games before fine finishes from Isco and Alvaro Morata rounded off the scoring to keep Madrid just six points behind Barcelona at the top of the table.

Despite his side’s fine form before the international break, Ancelotti was forced into a change of formation from a 4-3-3 to a 4-2-3-1 as Sami Khedira suffered cruciate ligament damage in Germany’s 1-1 draw with Italy last week.

Real Madrid’s Cristiano Ronaldo, seen during their Spanish La Liga match against Almeria, at the Med …

But on their return to the side, Asier Illarramendi and Isco performed excellently to leave Ancelotti lauding the variety of options he has at his disposal.

“Illarramendi has worked for two weeks and was in very good contition, as was Isco. To put the players in a more comfortable position we changed things a little bit. Illarramendi and Xabi Alonso played very well, both defensively and offensively. The team had a bit more balance thanks to their work.

“It is important to have the squad with players able to play in different formations. Today we changed to play Illarramendi and Isco in their natural positions, but it could be with (Luka) Modric we could play differently or Casemiro could replace Khedira because they have similar characteristics.”

And the Italian was particularly pleased with the response of his side following the international break as they had struggled on their return to league action previously this season.

“Overall, it was a good game because we didn’t concede a goal. The team played well and worked together. We have to take advantage of the moment because we are playing well.

“In the past we have had problems after the international games and today was very different so that is why we are so happy.”