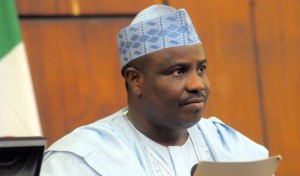 The Speaker of the House of Representatives, Alhaji Aminu Tambuwal, says the rotation of political offices among different sections of the country does not produce the best leaders.

Speaker Tambuwal at “The Christopher Kolade Symposium.’’  in Lagos said, “Honestly, this idea of turn-by-turn arrangement in the holding of political offices does not produce the best leaders.”

Speaking at the 5th Nigeria Leadership Conferencein Lagos, Thursday, the Speaker noted that rotation of the Senate President’s seat, Office of the Governor or the zoning the Office of the President, based on sectional considerations, is not the best for Nigeria.

Tambuwal however advocated for the people to allowed to elect into office leaders as zoning  constricts the space, from which good leadership emerges and it also threatens good governance which is an ingredient for development.

Represented at the event by the House Minority Leader, Rep. Femi Gbajabiamila. He said the problem had impeded the country’s efforts to attain sustainable development.