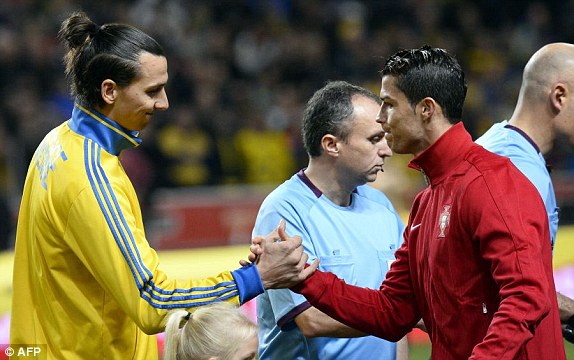 Zlatan Ibrahimovic is telling all who care to listen that he was not congratulating Portuguese forward, Cristiano Ronaldo after the latter hit a hat-trick as Sweden bowed out of World Cup qualification when Portugal defeated his team in Tuesday in a crucial World Cup qualifier.

The Paris Saint-Germain forward was captured on camera clapping his hands when Ronaldo completed his hat-trick but Zlatan has come out to say he was clapping so as to encourage his team-mates and not an appreciative gesture towards Ronaldo’s talent.

“Was I applauding Ronaldo? No, I was just trying to encourage my teammates. I clapped my hands to cheer them up and motivate them for the last few minutes.” Ibrahimovic told La Gazzetta dello

“We had already gone down before. It is important not to give up until the final whistle because the unexpected can always happen.” the towering forward explained further

“He’s obviously a great player, but we allowed him way too much space. Nobody’s as good as he is on the counterattack. This game once more showed his biggest qualities,” he said.

Zlatan however was diplomatic and reluctant in accepting Ronaldo as the World Best footnballer in the waiting “Is he the best player in the world? I can only say that he scored one goal more than I did.”