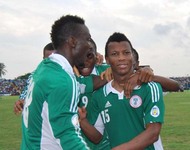 After the outstanding performance at the U-17world cup, the Super Eagles coach Stephen Keshi has said he intends to call up a few of the U17 World Cup winning players to the Super Eagles in preparation for next year’s CHAN tournament.

“I watched them during their tournament and I did mention that I liked a few of the players and of course I will like to take a closer look at them. So the plan is to invite them to the training programme for next year’s CHAN and monitor them”.

Keshi in an  interview with supersport.com said people need to understand that even though they won their tournament, it does not mean they are ready to play for the senior teams immediately.

The Eagles Coach added, “Like I keep saying, I am on the lookout for those players that will improve the present squad so these U-17 boys will get the first crack at it. I will be pleased if one or two step up their game and make it”

Sport Analyst have continued to call for the U-17 world cup winners to be given an express pass to the Super Eagles of Nigeria squad following their victory in Dubai.