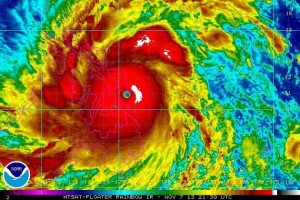 When Typhoon Haiyan hit this coastal town, residents ran for Saint Michael the Archangel Church. Now, 10 days later, more than 100 of them remain.

“I was in my house, but it was destroyed,” said Belen Cabonce, 87. “We ran for higher ground, and this was it. Some people stayed in houses trying to hold on, but most of them came here.” Ms. Cabonce has lived here ever since, sleeping on a damp pew, wondering when the next shipment of relief goods will arrive.

She has not heard from her two children in Tacloban, the city that lost more than 800 people in the storm, since the typhoon hit on Nov. 8. “Please give me aid,” she said. “I’m alone.”

As the Philippines begins to clean up after the worst typhoon in memory, it is faced with a huge problem of feeding and housing its displaced population. The government says that about four million people have been displaced, with some 350,000 living in about 1,500 evacuation centers.

“The evacuation centers are an increasing concern,” said Matthew Cochrane, spokesman for the United Nations Office for the Coordination of Humanitarian Affairs. Places like the Tacloban City Convention Center, an indoor basketball stadium that is now home to about 2,500 people who lost their homes in the storm, are straining under a lack of sanitation and basic supplies. “People are living in squalid conditions in need of as much support as they can get,” Mr. Cochrane said.

In addition, about 2.5 million people require food aid. “The most pressing need is food,” he said.

Basey’s mayor, Junji Ponferrada, 43, estimates that the storm damaged or destroyed the homes of one-third of the population of this city of 51,000 in Samar Province. He said he was struggling to feed and house them all. “People are saying, ‘We don’t want a message of hope. We want food,’ ” he said.

The Basey District Hospital, which sits on a hill facing the church, has extensive damage from the storm. But a few rooms survived, allowing the primary care hospital to provide basic services like delivering babies and treating diarrhea caused by unclean water, said Dr. Jessamine Elona, 33. A team of Japanese doctors has helped treat cuts and wounds caused by flying debris during the typhoon.

Pacquito Manog, 60, a farmer in the village of Iba, which is part of Basey, said Typhoon Haiyan badly damaged his rice crop, leaving him with only 10 percent of his anticipated yield. “We will try again next season,” he said. “We will start planting next month for harvest in April, if we have enough money to pay for seeds.”

In the nearby village of Magallanes, about 75 people stood by the side of the road waiting for a promised delivery of food. They put up large handmade signs with the name of their neighborhood, and held tickets with the face of Egay Tallado, the governor of Camarines Norte Province, which was providing the aid. “We weren’t given a specific time, we were just told to wait,” said Victoria Cajara, 51, a Magallanes village counselor who had been by the roadside for four hours.

Mayor Ponferrada said other towns and provinces had been the chief suppliers of aid to Basey, where 191 died in the storm and 39 were still missing. In the basketball stadium, a medical team from Camarines Sur Province offered medicines and minor surgery. A group from the city of Valenzuela in Metro Manila, which arrived Monday after traveling for five days, scouted how to distribute its five truckloads of goods and where to station five doctors.

As Mr. Ponferrada cleaned mud and trash from his waterfront office, four trucks from the Japan International Cooperation Agency arrived with 77 bundles of plastic, each 165 feet long, for building basic tents. A few hours earlier the trucks would not have been able to squeeze onto the narrow waterfront drive, which had only recently been cleared of debris by teams from the Metro Manila Development Authority.

At the church, a runners club from Samar handed out 6.5-pound bags of rice, crackers and bottles of water to a line of people that streamed out the front door.

It is not the first time that this town’s Roman Catholic church, with its limestone walls and wide buttresses, has been called on to house the homeless. First built by Jesuits in 1656, the church was largely destroyed by a typhoon in 1880. After the end of Japanese occupation during World War II, it served as a refugee camp.

The church, which sits on a hill overlooking the badly damaged downtown, avoided destruction. But signs of damage are everywhere. The force of the storm blew out a stained-glass window in the south wall of the chancel. It lay toppled over, the leading holding together its colored panes.

The church’s corrugated metal roof, with detailed murals showing the Tower of Babel, Catholic saints and a scene from Revelations, has been riddled with coin-size holes that allow in rain and thin shafts of light.

The red stone floor is slick with rainwater. The wooden pews are warped, their knee rests now used as head rests for reclining evacuees. Water and food containers, pots, pans and bags of clothes line the pews. Dogs sleep on the floor.

Outside, food is cooked over open fires, clothes dry on lines hung between palm trees, and piles of bottles and trash climb high. The bathroom is a wall in the church yard.

The Rev. Gil Cabujat, 44, said the church was willing to house the homeless. But he sounded a note of frustration. He said many of the churches’ new tenants had been sleeping through the daily 6 a.m. Mass.

A dysfunctional system makes no exceptions, It respects no one