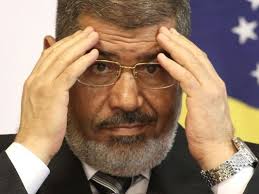 Egypt’s ousted leader Mohammed Morsi has gone on trial in Cairo, telling the judge the case is illegitimate as he remains president.

He and 14 other Muslim Brotherhood figures face charges of inciting the killing of protesters outside the presidential palace in 2012.

After Mr Morsi’s remarks and his refusal to wear a uniform, the judge adjourned the trial until 8 January.

Protests took place outside the court and elsewhere in Cairo.

Mr Morsi was ousted by the military in July after protests against his rule. Until now he has been held at a secret military location but the judge announced that he would instead be taken to jail.

Some reports say that he will be held at Tora prison on the outskirts of Cairo, others that he will be taken to Burj al-Arab jail in Alexandria. A decision is due to be taken by the Cairo court of appeal, state-run Mena news agency says.

Early on Monday Mr Morsi was brought into the sprawling Police Academy compound by helicopter. Other defendants, including Essam el-Erian, Mohammed al-Beltagi and Ahmed Abdel Aatie, were said to have arrived in armoured personnel carriers.

No television pictures were broadcast from the court although journalists were allowed in for the former president’s first public appearance since he was deposed on 3 July.

As he entered the courtroom, Mr Morsi refused to remove his blue suit and put on the required white prison uniform. The defendants, who were being held in a cage in the courtroom, chanted “illegal, illegal”.

When asked to give his name, the former president gave a defiant response, according to reporters inside the court.

“I am Dr Mohammed Morsi, the president of the republic. I am Egypt’s legitimate president. You have no right to conduct a trial into presidential matters.”

The judge twice temporarily halted proceedings before adjourning the case until January.

Before the trial began Mr el-Erian, a deputy leader of the Brotherhood’s political wing, told the BBC that one of his fellow defendants had been mistreated with some kind of water torture and had been beaten until he was on the point of collapse.

Mr Morsi and the 14 other members of the Muslim Brotherhood had been widely expected to use the occasion to underline what they see as the illegitimacy of his removal from power.

Police had to step in at one point because of heckling in the court. The BBC’s Orla Guerin says some of those attending the trial, including women journalists, shouted that the defendants should be given the death penalty.

The trial had been due to take place at Tora prison on the other side of Cairo but had been switched late on Sunday, apparently to deter protesters.

Shortly after Mr Morsi’s arrival, a small crowd arrived and began chanting outside the police compound more than one hour’s drive from the centre of the city.

The crowd soon grew and protesters were briefly seen on state TV chanting slogans against army chief Gen Abdel Fattah al-Sisi, who led Mr Morsi’s removal from power. Demonstrators shouted at a state TV crew and chanted “liars” before chasing them and pelting them with stones.

Although Mr Morsi won the presidency in a democratic election, during his 13 months in power he fell out with key institutions.

The ex-president is accused of “inciting his supporters to carry out premeditated murder, and inciting the use of violence and thuggery” over the deaths of at least 10 people during intense clashes in December 2012 which followed a decree that gave him wide-ranging powers.

After he was ousted, a sit-in protest at Rabaa al-Adawiya Square in Cairo by Mr Morsi’s supporters was violently broken up by the military, leading to the deaths of hundreds of people.

The interim government has also cracked down on the Muslim Brotherhood, banning the Islamist organisation and arresting dozens of senior figures.

Pro-Morsi supporters say he was removed in a coup and is now facing a politicised trial. Human rights groups accuse the security services of acting without accountability.

Legal experts say that if convicted Mr Morsi could be jailed for life or face the death penalty.

His senior communications adviser, Wael Haddara, told the BBC that the process was a “charade” because everyone involved had been appointed by the military.

“What is the military afraid of? Why won’t they let him speak? Even prisoners have rights.”

The National Police Academy is also hosting the trial of his predecessor, Hosni Mubarak, – meaning there are two former Egyptian presidents being tried concurrently.

An estimated 20,000 security personnel have been deployed to keep order amid fears that the trial could deepen the rift between Egyptians and cause greater unrest.

On Sunday evening, gunmen killed two Egyptian policemen near the city of Ismailia.

Related Topics:Burj al-Arab jail
Up Next

Scores Of People Killed Across Iraq During Shia Religious Festival