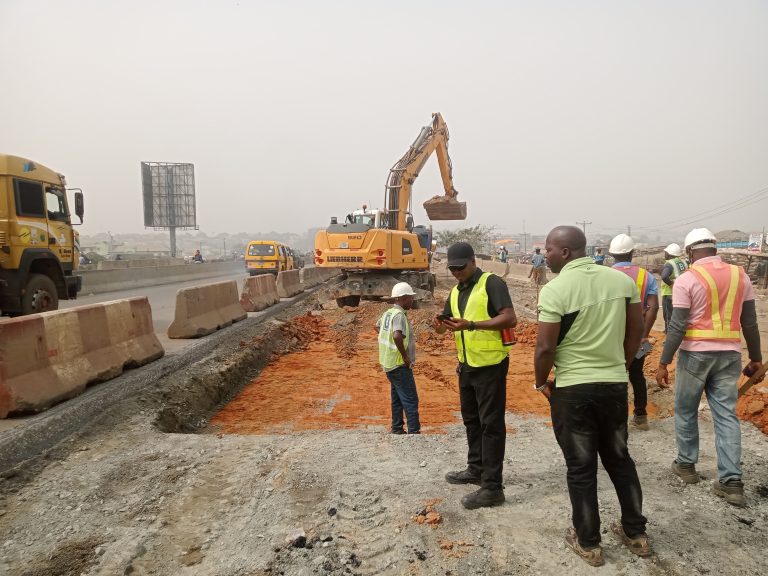 Some road users on Thursday appealed to the Federal Government to adopt more measures to reduce gridlock as contractors returned to site after the festive season to resume construction works on Lagos-Ibadan Expressway.

Work on the OPIC axis, which resulted in traffic snarl-ups and hardship to road users in the area, was suspended in December for the festive season to ease movement of travellers, bringing relief to motorists.

A report by the News Agency of Nigeria (NAN) noted that work men who returned to site on Tuesday were seen between Kara and OPIC on the Lagos-bound side.

They were using earth moving equipment to scarify some portions while at the same time laying fresh construction materials on other sections.

Officials of the Federal Roads Safety Corps and TRACE were seen controlling traffic at the U turn around OPIC/Fatgbems filling station.

Traffic on the Lagos-bound side of expressway was moving slowly around noon when NAN correspondent visited, with some motorists saying they spent about one hour delay in the build-up caused by the contractors’ return to site.

Some of the road users commended the swift return to site but emphasised the need to minimise hardship caused by impact of gridlock around construction zones.

Mr Osas Idohasa, a commercial bus driver who plies the Ikeja-Ojodu and Wawa-Arepo routes, commended the quick resumption of works but appealed for urgent measures against gridlock as well as speedy completion of the project.

Idohasa said he would henceforth study traffic situation before conveying passengers on the Wawa-Arepo axis of the Lagos-Ibadan Expressway to minimise loss of revenue and man-hours.

“How much do I make daily that I will allow myself sit inside traffic?” he queried.

Mr Suleiman Alabi, a tipper driver at Fatgbems Bus Stop, appealed to Julius Berger to give back to society by always using recyclable construction materials to fill bad portions along the highway to improve driving experience.

“Government should tell Julius Berger to go and grade that other lane at Wawa to Fatgbems. They should use all these waste materials to go and fill all bad portions there. They should do it as their corporate social responsibility.

“I personally dropped 12 trips of rubbles there as part of my own contribution to prevent accidents and save businesses. No one paid me,” he said.

A panel beater at Fatgbems, Mr Taiwo Adeniran, and Mrs Peace Okey, a resident of Ibafo, joined other motorists to appeal for measures against gridlock to boost security of road users.

They expressed worry over crime and criminality perpetuated between Berger and the Long Bridge, usually caused by gridlock, while lamenting that the situation was usually worse at night.

Responding, the Federal Controller of Works in Lagos State, Mr Umar Bakare, said Julius Berger was working to quickly fix portions  between Kara and Long Bridge where they could not complete before the holiday.

Bakare, who is in charge of Section One of the project which spans Ojota in Lagos to Sagamu Interchange, said alternative routes around OPIC and Isheri would be rehabilitated to ease congestion.

He said adjoining Isheri Road that passes in front of OPIC would be upgraded and made motorable to accommodate traffic spillover caused by diversions when work moves to the Ibadan-bound lanes.

The controller said that roads adjacent to the Otedola Bridge Section on the highway around CMD Road would also be made motorable to  ease movement.

He, however, said it was impossible to create alternative routes on the Lagos-bound side between the Long Bridge and Kara where work was currently ongoing because the portion was a Right of Way for gas pipelines.

“For the remaining permanent jobs, we are already on the drawing table with traffic management plan, we are also discussing with other stakeholders like the Police, Federal Roads Safety Corps, the agencies of Ogun and Lagos States in charge of traffic management, that is talking about LASTMA and TRACE.

“We are also discussing with ministries of Transportation, Works and Infrastructure in Lagos State. We are going to be making announcements about our operations on the road from time to time.

“This, we believe, will help to properly sensitise the public on the nature of our work and diversion,”  he said.

Speaking about the Lotto interchange bridge under construction, Bakare said the main carriageway would be given priority to ease passage for motorists before completion of the bridge.