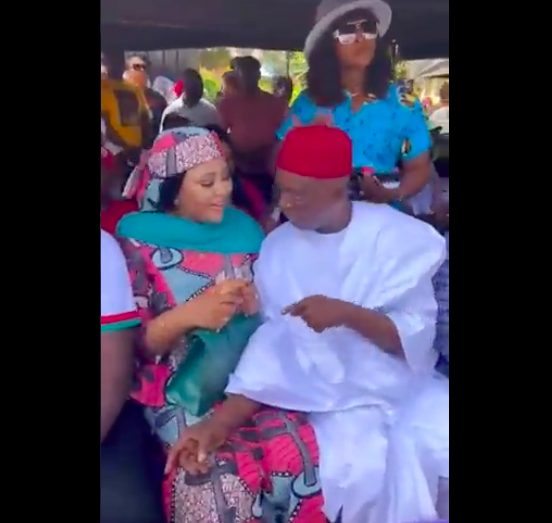 Nollywood actress, Regina Daniels, joined her husband, Ned Nwoko, on the campaign trail as he seeks to woo voters in the Delta North senatorial district.

She shared videos from the campaign on her Instagram page on Monday. Her husband is seeking to return to the National Assembly to represent Delta North senatorial district on the platform of the Peoples Democratic Party.

Meanwhile, the candidate of People’s Democratic Party, PDP for Delta North senatorial district (Anioma), Ned Nwoko has said Governor Nyesom Wike of Rivers state should be kicked out of the party.

Nwoko made this remark on Monday at the Asaba airport while returning from Abuja.

According to him, Wike has constituted nuisance to the PDP.

He added that Rivers state governor has done a lot of damage to the party and should be shown the way out.

He said, “Wike is a nuisance, quote me anywhere. If I were [in] the leadership of the party, I would have acted differently. I would have done things differently. He has done a lot of damage to the PDP and I don’t know what they are waiting for to show him the way out.”

Recall that Wike and the G-5 Governors have been leading the call for the resignation of the National Chairman of the PDP, Senator Iyorchia Ayu, to pave the way for the emergence of a Southern Chairman in line with the zoning arrangement of the party.