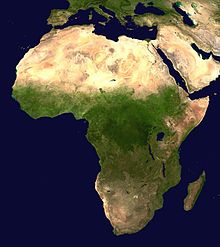 Somewhere in Africa, some four million years ago, lived the first set of humans on Earth. But, that is not only the thing of interest about the land of great human resources. In this same continent, once lived a great man who is a perfect paradigm of “I am because you are.”

He went by the name Muammar Gaddafi and was genuinely instrumental to the creation of a united state of Africa where we can develop without western interference, and enjoy the milk and honey with which this giant space is endowed. He exemplified the struggle and commitment to guarantee stability, peace and security for the bulk of African citizens when the fire of western dominance was fast burning on the continent. He was humiliated, rebelished and eventually captured by the white overlords.

An unimaginable reality about Africa is that this continent that seems to be the birthplace of the first homo erectus may just hold the key to the survival of humanity. How commendable is it that this same continent is also the birthplace of the social philosophy that points towards a sustainable future for us, its offspring. No, I am not talking about a new technology that will stop climate change but I am talking about a new society that would transform the world, it inhabitants and adopt a critical mass of human beings that would prioritize our ability to work together and ultimately shift the context of what it means to be a human being living in the 21st century.

Decades after independence, it saddens the heart that many African states have completely deviated from the specific and distinct peculiarities that made us above all equals and a centre of concentration among counterparts and as a result has led the notion that the continent is a crucible of conflict, peril, and underdevelopment. Many a time when I have the reminiscence of past warriors on this land, one logical conclusion I always reach is that, irrespective of their tongue fights for collective interest, their cruel hearts felt pity for this continent as such sacrifice lots to achieve unity and even during the course of the struggle some joined their ancestors.

Sadly, Ours has become a continent that now battles the same problems for decades. Our leaders have failed to achieve the unity that once reigned. The problem remains fertile, and over the years, they keep recycling them as empty political promises. Today in Africa, there is neither job for graduates nor food for common man. This has created many hopeless individuals who now look towards crime as the resort. Businesses are also not spared from the rod. Our business-owners are crippled by poor infrastructure, alongside stifling taxes and terrible economic policies while terror activities keep rising on the continent to mention but a few.

On this show of infidelity, I posit that if a Dortmund fan, though not born with a yellow blood, can be faithful with his club whether it wins a soccer match or not, why then can’t Africans be faithful to Africa in time of bliss and hardship? Why have we failed to contribute our quota towards National development? Moreso, with the Covid19 reality that we are waking up to on this continent, verily, it has signal to us that our greatness would only come when we foster unity regardless of nationaity, ethnicity and religion.

A Nigerian, who obviously should be proud of his nation, would definitely not like to be associated with the ravaging fuel of rape cases that Nigeria is known for. Neither would an Egyptian say he is from a country where the army is amassing weapons at the Libyan border to attack Turkish provocations. Hence, it points that the land is not in peace. Truly, we have made silly mistakes in our choices of leaders, especially those that involve leniency on our interdependent collective humanity and hostility to the pursuit of individual happiness. However, those mistakes are not enough reason for us to wallow in anti-patriotism and seek inexistent greener pasture.

Being an African should mean that we have a bigger responsibility to deal with the manifold challenges we all face. We need to meet more often on an equal term, and we need to get everyone on board. A responsibility to salvage our fatherland from the shackles of meeting pressing development needs which continues to leave Africa poor, in many respects. A responsibility to revive the spirit of personhood which involves being a part of the web of relationships that once existed. A responsibility to fight for collective interest, remain hopeful and patriotic despite all odds.

Often times, we reminisce about good old days, but I see no reasons why good old days always have to be old. The tranquility and collective interest of yesteryears can be relived. Our continent can be re-built. Our atrocities can be revisited. Our unity can be fostered. But, all that would only be possible when we direct our minds and actions to the remarkable statement of Kwame Nkrumah “We are Africans, not because we were born in Africa but because Africa was born in us.” Indeed, when there is love, there must be peace and we cannot have progress except we unite upon the foundation of collective humanity.

As much as I wish to remain optimistic to the theme “The Leadership we want”, the truth is, this lofty dream can only be achieved when we jettison politics with bitterness, acrobatic religiousity, collective efforts of the good people of Africa, leaders and the generality of humanity. Just like the two longest rivers in Nigeria, Niger and Benue cojoined and as well fortied to flow peacefully despite originating from different sources, our fate also lies in our hands. As people, we need to work together, not as a divided people that we are now. We need to think, plan, act and stop speaking in staccato voice. After all, for the world to be in stability, there has to be peaceful co-existence.

Where are the women in Nigerian politics?