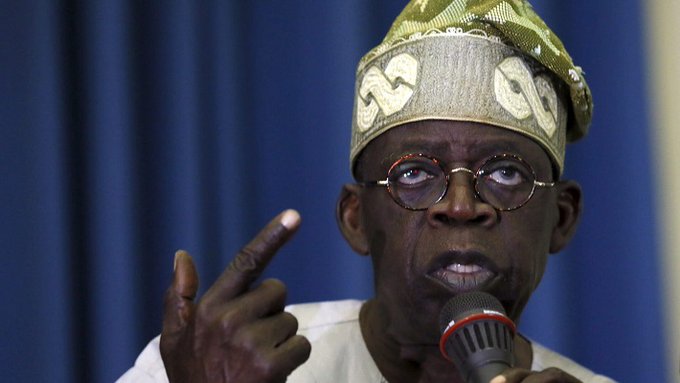 The national leader of the All Progressives Congress (APC), Bola Tinubu has claimed that bandits and insurgents attacks are caused by some strong forces who want to destroy Nigeria.

Tinubu stated this on Saturday after he was conferred with an honorary doctorate degree by the Federal University of Agriculture, Makurdi.

He urged Nigerians to give the truest meaning to the national motto “peace and unity” and not to allow those he described as agents of destruction and merchants of violence to have their way.

“Terrible people and strong forces want to break Nigeria’s appointment with its greater destiny. These people have unleashed terror and violent criminality against us,” he said.

“By attacking agricultural players across the nation, they seek not only to ravage the agricultural community, but to visit misery on the rest of the nation through food scarcity and food costs that poor people can simply not afford.

“In effect, these mean forces seek to impose a food production and distribution crisis on us by disrupting strategically important agricultural areas and activities.”

The former Governor of Lagos State also lamented that the agricultural sector cannot feed the country and protect themselves from bandits at the same time.

“We must decide whether our farmland and grazing areas are to be battlegrounds, or they are to return to their role of feeding the nation,” he added.

He advised Nigerians to refrain from fighting one another in order to present a unified front against the common threat.

“Whether city or rural dweller, whether farmer or herder, we must join in common cause against the real enemies that we face: the terrorists and bandits who attempt to pull us apart,” he said.

“Those who need peace in order to ply their trade must recognise the bigger threat that now confronts them. We can work the differences between farmer and herder.

“However, there is no way to reconcile either with terror or banditry without forfeiting their livelihoods, if not their very lives.

“In the war against terror and criminality, the nation must protect its ability to feed its people.

“The military must begin to revise their strategies so that agricultural communities are better protected. This will enable higher food production, thereby reducing hunger and poverty.

“Even with these changes, we also must do better with food security. We must produce more and be more efficient in bringing the increase to market.”

Related Topics:NigeriapoliticsSecurityBola Ahmed Tinubu
Up Next