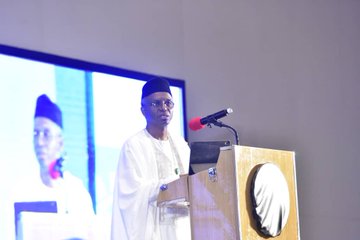 Kaduna State Governor, Malam Nasir el-Rufai on Tuesday, stated that the federal government should apprehend and kill the outlaws.

He also restated his opposition to negotiation with, and payment of ransom to bandits.

“Nobody living in the forest is innocent, and we must kill them all,” he said, adding: “The Chief of Air Staff has been doing well and this has led to a reduction in the activities of bandits in recent times.” he stated.

The Governor said this during a panel discussion on “The Economic and Social Impact of Insecurity on Education,” at the national dialogue on financing safe schools in Nigeria, organised by the Ministry of Finance, Budget and National Planning in Abuja.

Explaining that the target of kidnappers and bandits were girls and boarding schools, el-Rufai said there should be no form of negotiations with the outlaws, adding that anyone found in the forest should be killed.

He advocated the purchase of drones in addition to aircraft in the fight against insecurity, even as he explained that another way to discourage banditry is to stop negotiating with them and paying a ransom.