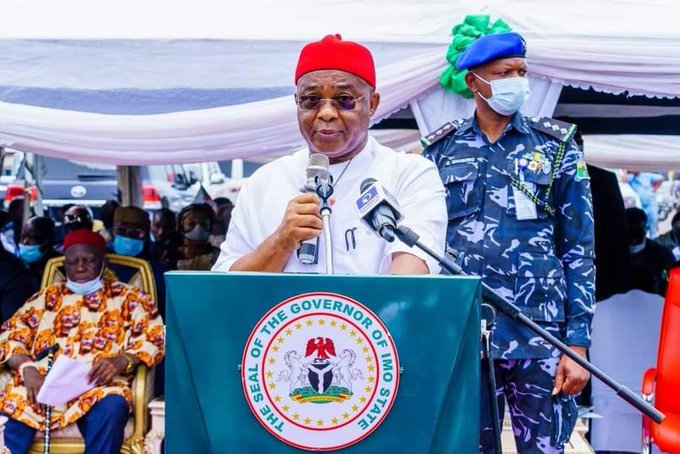 The Governor of Imo State, Hope Uzodinma, has said that what the Igbo ethnic group wants is “justice, equity and fairness,” not Biafra.

Uzodinma said this while delivering his opening address at the first South-East security meeting held on Sunday, April 11, 2021, in Owerri, the Imo State capital.

The meeting was attended by his counterparts from the other states in the South-East as well as security chiefs and other stakeholders in the region.

The Governor seized the opportunity to debunk the theories concerning the recent attacks on the Owerri Custodial Centre and the state Police Command by gunmen.

He said, “Following Monday’s attacks in Owerri and the preceding ones in various parts of the South-East, many people have come up with varying degrees of theories concerning the motive of the attackers and its consequences on our people. The most ridiculous of these theories is the one that posits that Igbo no longer want to be part of Nigeria hence their belligerence and predilection for war and violence.

“Nothing can be further from the truth. Perhaps that is the intendment of these merchants of violence across Igboland. But that is a wicked and malicious conspiracy theory, concocted by enemies of Ndigbo. Let us therefore in one voice declare here and now that the South-East is not at war with the federal government. If anything, we are on the same page in not only condemning terrorism anywhere in Nigeria but in fighting the same with all the arsenals at our behest.

“Like I have propounded time after time, Igbos are not at war with anyone neither is anyone at war with Ndigbo. The fact of the matter is that Igbos are the highest stakeholders in Nigeria. In most cities in Nigeria outside Igboland, our people constitute the second-largest in population, after the indigenes of the state. Our people have more stakes in real estate in virtually all the major cities in the country. Our people control the commanding heights of commerce all over the country. So who has more stakes in Nigeria than the Igbo? As I said at a different forum recently, no sane man will urinate into a well he and his family drink from. I know for sure that Igbos are wise enough to know that.

“What Ndigbo wants is justice, equity and fairness. A Nigeria that provides a level playing ground for all citizens. That is what we want, not Biafra. And we believe we can get what we want through constructive and tenacious engagement with fellow Nationals and relevant institutions, not by violence or war. Igbos have seen war, not in storybooks or in movies but real war. No right-thinking Igbo, who experienced the excruciating and devastating effects of the civil war on Igboland and our people, will vote for another war. The young and inexperienced may zealously want to beat the drumbeat of war, but it is our duty, as their parents and elders to talk them out of it.

“Those creating the erroneous impression that Igbos want to leave Nigeria are either naive or mischievous. Igbos need Nigeria just like Nigeria and Nigerians need Igbos.

“We also have those who see what is happening as a dress rehearsal for 2023. The motive here is to create again an erroneous impression that Igbos are not united and therefore unfit to produce the next president of the country. This again begs the question. I don’t think there is any ethnic group in Nigeria that is as united as Ndigbo. We all can’t be in the same political party just like other ethnic groups are not in one political party. In fact, we, the Igbo, are more united than any other ethnic nationality in Nigeria, through our shared struggles, our chequered history and our deep-rooted extended family traditions and brotherhood. These values make our belief and commitment to a united Nigeria beyond reproach.

“Therefore we should jettison these conspiracy theories and treat this security threat purely for what it is. As a region, there is an absolute need for us to collaborate and work out a solution. Like our people say when we urinate together it foams.”

Buhari has no competence to rule the country – Tanko Yakasai