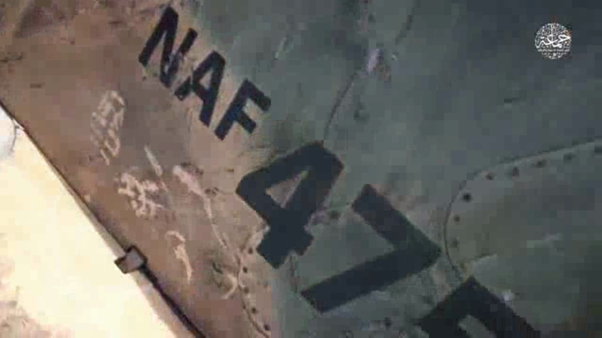 Terrorists group, Boko Haram claims responsibility for shooting down a jet that was declared missing earlier announced by the Nigerian Military authorities.

An air force jet on a support mission in Borno State dropped out of radar contact – The Nigerian Air Force Alpha Jet was on an interdiction mission in support of ground troops.

In a video clip released by Boko Haram, Bulama Bukarti, a security analysts wrote that the factional group led by Abubakar Shekau’s BH, claims to have shot down Nigeria’s missing jet.

“It shows how what appears to be an anti-aircraft weapon brought down a flying jet. A fighter then stands next to the burning aircraft and dead bodies saying it’s Nigeria’s NAF 475”. Bulama added.

Bulama, also an Analyst with the Tony Blair instituted who tweeted images of the crashed jet further wrote, “JAS is believed to weaker than ISWAP, but atrocities like this and the rocket attack on Maiduguri show that it remains a big threat. For those asking for the video. I’m afraid that I don’t share terrorist content. But I suppose some platforms will publish it soon”.

The mission was part of ongoing counterinsurgency operations in the North East.

“The loss of radar contact occurred at about 5:08 pm on 31 March 2021,” according to Air Commodore Edward Gabkwet, the air force’s director of public relations and information.

“Details of the whereabout of the aircraft or likely cause of contact loss are still sketchy but will be relayed to the general public as soon as they become clear.”

HumAngle also reports that, “Boko Haram faction has released a footage of it shooting down a fighter jet mid-air. The military had on Wed. said an aircraft was missing. The video also showed fighters carrying RPG & artillery equipment, as well as a corpse of the pilot & the aircraft’s debris. Details later”.

Early Friday, the Nigerian Air Force (NAF) in statement said, Alpha Jet aircraft that went off the radar in Borno State might have crashed, authorities said on Friday.

The aircraft marked – NAF475 – had two crew members on board when it went missing on Wednesday in Borno State.

Air Commodore Edward Gabkwet, the NAF Director of Public Relations and Information, disclosed this in a statement while giving an update on the incident.

According to Gabkwet, NAF surveillance aircraft and Special Forces, as well as Nigerian Army troops on ground are conducting extensive search and rescue efforts.

He stated that the Force remained hopeful that the crew would be found and rescued as it does not rule out anything regarding the incident.

“Yet to initiate, start and complete even one hospital” – Former Presidential aide, Reno Omokri stages protest against Buhari in London