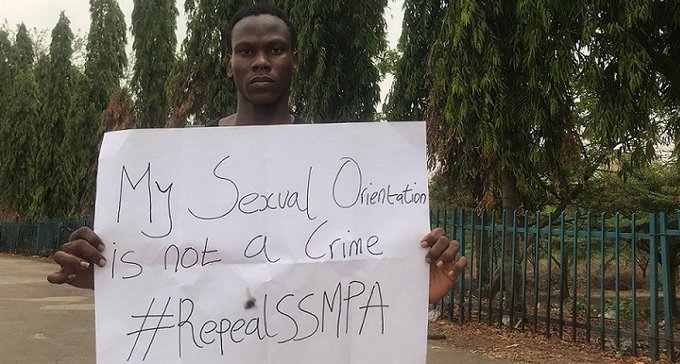 A queer Nigerian, Victor Emmanuel has gone on an indefinite hunger protest at The National Assembly until the Same-Sex Marriage (Prohibition) Act 2013 is repealed.

Emmanuel who is a youtuber of the ‘For Fags Sake’ declared the protest in a video he shared on Twitter on Saturday.

He said that the SSMPA is inhumane and has been unjustly weaponised by many against members of the GBTQ community in Nigeria.

Despite international pressure, the Same-Sex Marriage (Prohibition) Act 2013 was signed by then President Goodluck Jonathan in January 2014.

The Nigerian law already had previous provisions making homosexual sex illegal; but the 2013 Act adds, “A person who registers, operates or participates in gay clubs, societies or organizations, or directly or indirectly makes public show of same-sex amorous relationship in Nigeria commits an offense and is liable on conviction to a term of 10 years.

Lamenting the injustice in the law, Emmanuel who is one of the creators of the #EndHomophobiainNigeria movement said, “Queer people — for just existing — can go to jail for the same amount of time that rapists [are jailed] for raping people.”.

“My name is Victor Emmanuel and I am announcing that I am going for an indefinite hunger strike until that bill (the SSMPA) is repealed. So I will not eat until my body give out or until that law is repealed.”

Speaking further, Emmanuel said he choose to protest in front of the National Assembly despite its heavy security because that is where the law was signed.

“None of this is okay,” Victor adds. “I am going to be here [in front of the National Assembly], protesting every single day, because this is the same building where that law went through before it was signed by the former president.

“If you’re queer, an ally, or you’re just a human being who isn’t wicked enough to actually think we deserve 14 years imprisonment for just existing, then I ask you to join me on this journey,” he added.

Related Topics:LGBTQqueer Nigerian
Up Next