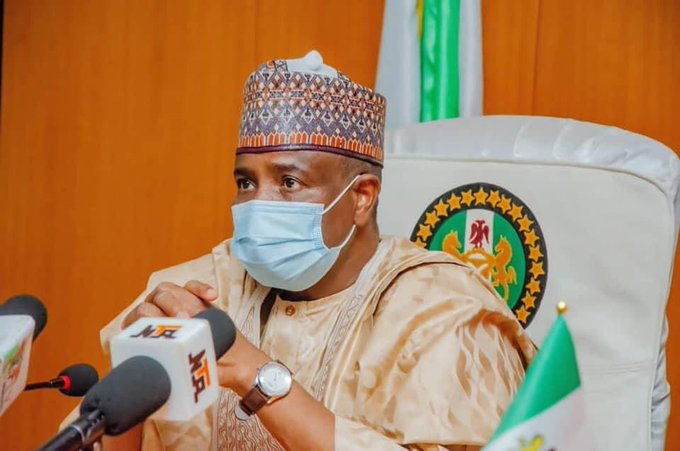 The Governors Forum of the Peoples Democratic Party (PDP) has pledged its support for the Federal Government to tackle the security challenges in the country.

Members of the forum led by the governor of Sokoto State, Aminu Tambuwal, declared their support for the government at a meeting held on Thursday in Abuja, the nation’s capital.

The governors elected on the PDP platform shunned their political divide to provide the necessary support that would in turn boost the effort of the All Progressives Congress (APC) led government in ending insecurity in the land.

Briefing reporters at the end of the meeting, Governor Tambuwal stated that the nation’s security challenges, especially banditry and insurgency, required the cooperation of all, irrespective of party inclination.

According to him, the PDP governors are ready to work with the Federal Government in tackling the problem once and for all.

The meeting which held at the Abuja Lodge of the Sokoto State Governor ended at about 5:10pm.

The meeting was also attended by some national executive members of the PDP such as former Senate Presidents Bukola Saraki and Pius Anyim, as well as former governors of Gombe and Katsina States, Ibrahim Dankwambo and Ibrahim Shema, among others.

The rate of insecurity in Nigeria has become a major source of concern for the people as the government continues to assure them of safety.

Recently, the activities of bandits in the north-western region of the country led to the abduction of scores of residents who later regained freedom days later, and in some cases, weeks.

He stated that the government would apply its full weight to deal with criminals and would not be blackmailed by any group of people into negotiating with those who threaten the nation’s peace.

Monguno insisted that the present administration was not interested in negotiation with bandits, terrorists, and other criminal elements terrorising the country.