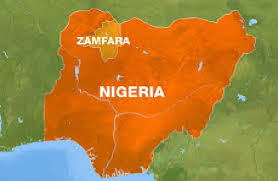 Terrorists have reportedly burnt down more than half of Ruwan Tofa, a town in Maru Local Government Area of Zamfara State, Northwest Nigeria, and abducted at least 60 persons including women and children.

BBC Hausa reported that the residents have started fleeing the town to nearby areas for safety. A resident who spoke to BBC Hausa said the terrorists have recently been frequently attacking to destroy lives and properties.

“They were there even yesterday and the day before yesterday. They burnt down our cars, houses, shops and about half of the town,” he said. He added that women, children and nursing mothers were among the 60 persons abducted by the terrorists.

He added that they put a distress call to security officers who did not come, despite promising. Muhammad Shehu, the spokesperson of the police in Zamfara State was not immediately available for comments when contacted.

Zamfara and Katsina states have been the hotspots of terrorist attacks in Northwestern Nigeria with a series of mass abductions, pillages and destruction of villages and towns.

Related Topics:NigeriaAbductionZamfara state
Up Next