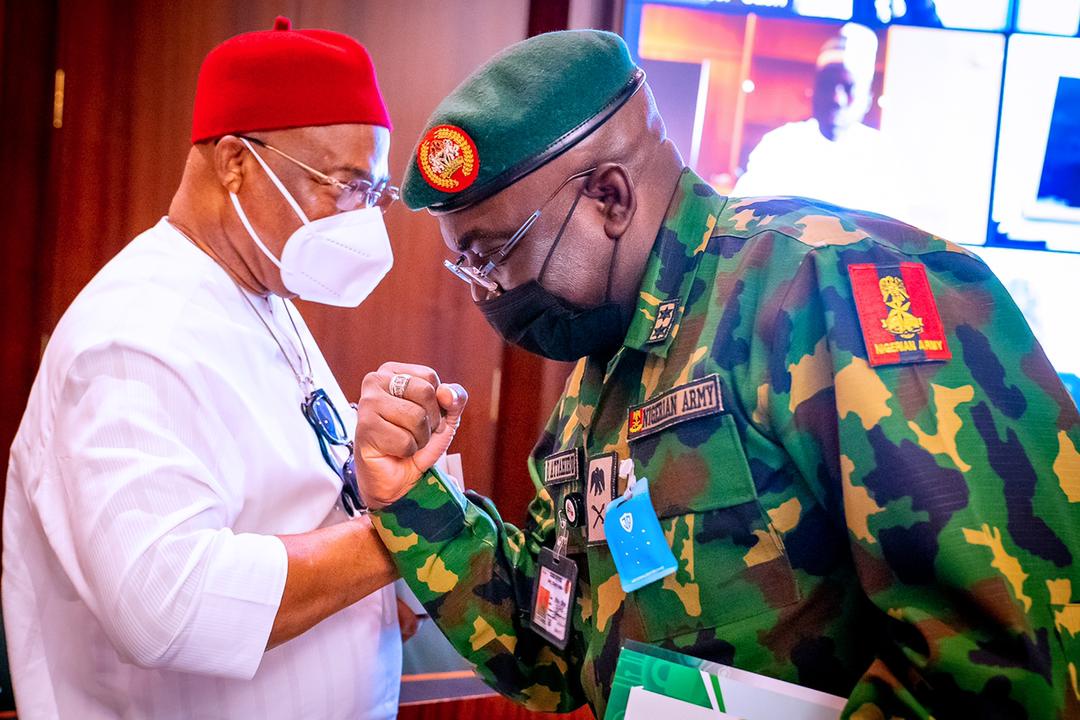 Imo State Governor, Hope Uzodinma has said he invited the military as a proactive measure to douse the tension brewing up in Orlu area of the state and avoid a repeat of the EndSARS protests aftermath.

The Governor stated this when he spoke to State House Correspondent after meeting President Muhammadu Buhari in Abuja on Tuesday.

Uzodinma alleged that there is a comparison between the EndSARS protests against police brutality in October 2020 and the Orlu tension that was becoming unbearable for the police to handle.

“Well, the issue of bringing the military to Imo state? You recall, during the #EndSARS protests, a lot of properties were damaged in Imo state, police stations were burnt down, soldiers were killed, their rifles removed from them.

“And immediately after the #EndSARS, we thought it was over. Then, issues of kidnapping, where you know, a Catholic bishop was kidnapped, who was killed. And these militants came out and begin to shoot. We’ve lost lives, market women were killed, old women were raped in Orlu area of Imo state and they visited this serious terror on the citizenry.

“And they I came here (presidential villa), pleaded with Mr. President for his support and he sent additional support by sending in police and the military also came in. And that is where we are.

“It was on my invitation that the military came. And I did that because I know the situation was beyond the local arrangement, we needed help. And the help was given to us.

“And as I speak to you the situation has come down to normal, people are now going about their businesses. And those caught will soon be charged to court. And all those military riffles from the army, the police, AK 47, and so on, were recovered by the people that came.

“We are a government; it is our responsibility to protect lives. And while we have the Nigerian Army, Nigerian police. We had security challenges, we invited them to go to work,” he explained.

He further explained that the military were used to attack the parallel Eastern Security Network that is led by Nnamdi Kanu, leader of the proscribed Indigenous People of Biafra (IPOB) and not the civilians as people as alleged.

He said, “Well, I don’t know what you mean. I told you that our initial intelligence and the efforts to control the sporadic shootings in Orlu that led to many dead, innocent women in the market, people selling food foodstuffs dead by a group of people that we were not able to identify.

“Preliminary intelligence reviewed where they were in a bush. Our local police and local military went there and confronted, were repelled.

“So, we discovered that the people had serious fire power. And that, of course, Nigeria, is a federation, Imo state is a federating unit, and all over the world, you have provincial police, you have federal police. So, there was a need for me to report situation and that I did and we were supported to deal with the situation.

“It is not about crushing anybody and those that came didn’t do any crushing. Those that came through their intelligence identified where these people were and I can tell you, all the people arrested, all the rifles recovered are intact. The people are under interrogation, not even one, not even one soldier, or one of those militants died in the process.

“I must commend DCP Abba Kyari for a brilliant job he did. So, let anybody politicize it. But I have a responsibility to protect the lives of my people.”