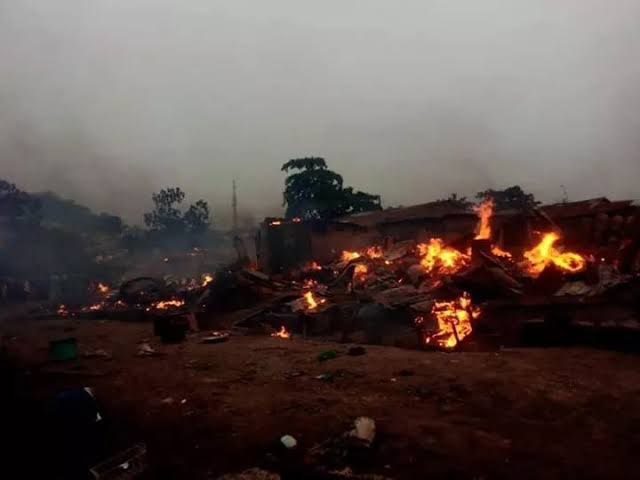 An eyewitness has narrated the happening at the Shasha market, Oyo State.

In a viral video on Monday, the eyewitnesses who identified herself as Nana Aisha corrected the popular claim that it was a Hausa who killed a Yoruba man by revealing it was a Niger man.

She said the clash between Hausa and Yoruba residents of the community was spouted when the Niger man poured basket of tomatoes in front of a Yoruba woman’s shop and the woman insisted that he wash the shop.

But while the man was telling her to be patient so he can get water, a Yoruba man joined them in the conversation and slapped the Niger man.

The Niger man returned the slap and that was when the Yoruba man slipped on the floor and slumped.

She added that it was an erroneous claim by a Facebook post who attributed the death to a Hausa man that sparked the intertribal clash that has claimed lives, properties and forced the government to close the market.

“This is the accurate story of what happened because I was there. A Niger man carried a basket of tomatoes, he fell down and the tomatoes all poured on the floor in front of a Yoruba woman’s shop. The woman told the Niger man to pack the tomatoes and also wash her shop. The Niger man was like this is a market, there is no where he’s going to get water to wash the woman’s shop. He pleased with her but she refused. She said she will not leave him alone unless he washed her shop.”

“So one idiot that was there posted rubbish online. He said an Hausa man slapped a Yoruba man to death.”

“Shasha thugs got angry and started killing Hausas. They thought it was really Hausa people that started the war, they didn’t know it’s a Niger man that slapped someone to death, not an Hausa man. So, please guys, whenever you want to post, investigate before posting, don’t just post rubbish. Just one post started a war. Just one post has killed many people”

Meanwhile, the Inspector General of Police (IGP) Mohammed Adamu has on Monday ordered immediate deployment of Police Intervention and Stabilization Forces to Oyo State to reclaim the public space, reinforce security and bolster public confidence in the areas affected by the recent crisis in the State.