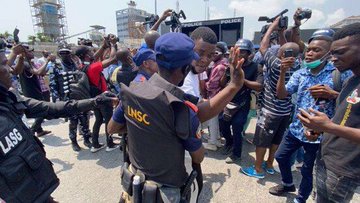 The police disclosed this on Sunday through a statement authored by the spokesperson of the Lagos police, Olumuyiwa Adejobi.

On Saturday, a second wave of the #EndSARS protest began in Lagos under the #OccupyLekkiTollGate rally, with more than 30 protesters arrested by security operatives.

The protesters have, however, been arraigned before a mobile court in Lagos, and granted bail.

However, a video circulating on the internet and has been subject of criticism directed to the police showed the police taunting the protesters who had been beaten and put in inhumane condition.

Reacting through the statement quoting the Lagos State Commissioner of Police said, Mr Adejobi said, “The attention of the Lagos State Police Command has been drawn to a viral video where some arrested ‘Endsars protesters’ were being molested in a bus by some individuals after their arrest.

“The command will fish out those responsible for the molestation and ensure they are punished for thier unprofessional conduct.

“He further urges Lagosians to be law-abiding and maintain peace at all times as the police and other security agencies will not allow any violence and break down of law and order in any part of the state.”

If you kill an herder, we will revisit you – Miyetti Allah vows to avenge all attack on herders