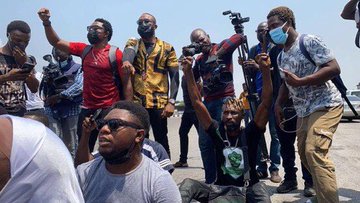 More protesters have been arrested at the Lekki Tollgate in Lagos where some young persons were picked up earlier in the day.

The police had arrested over 23 persons who converged on the tollgate to protest the repossession of the facility by the Lekki Concession Company (LCC).

Popular entertainer and activist, Debo Adebayo, popularly known as Mr Macaroni, was on Saturday among some of the earlier protesters arrested at the Lekki Toll Gate.

“Na military regime?” Mr Macaroni said after his arrest, on an Instagram Live while in a police van. “If na military, make we know sey na military, so make everybody dey hide.”

His phone and that of other protesters were later seized by the police, ending his Instagram Live session.

But last week, the Judicial Panel probing the #EndSARS crisis ruled that LCC should resume its activities at the tollgate.

This had irked persons aggrieved by the incident of October and they planned a fresh protest on Saturday.

And estimated 200 heavily armed personnel of the Nigerian Police were late Friday deployed to the toll hours before Saturday planned protest by the protesters.