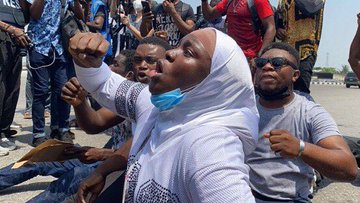 Protesters arrested by security operatives on Saturday, for demonstrating against the resumption of operations at the Lekki tollgate, have been granted bail.

More than 30 youths were arrested at the Lekki tollgate, venue of the protest, and arraigned before a mobile court in Yaba, Lagos.

They were arraigned on charges bordering on flouting the COVID-19 protocol on public gatherings, and “breaking an order not to protest”.

Modupe Odele, a lawyer who has helped arrange legal defence for the protesters Saturday wrote that, the Protesters arrested have all been granted bail including Mr Macaroni. “They pleaded NOT guilty to the following charges: 1. breaking COVID-19 gathering limits 2. breaking order not to protest One of them is injured and will get medical attention” – her tweets reads in parts.

Nigerian immigration officials had only recently returned the passport of Ms Odele after it was seized when she tried to leave the country last week.

Femi Falana, a senior advocate of Nigeria, told newsmen on Saturday that the arrested protesters were to appear before a mobile court in Yaba, Lagos.

According to Falana, they are being held at the State Criminal Investigation Department, Panti.

The protesters assembled at the Lekki toll gate on Saturday to campaign against the directive given to the Lekki Concession Company to resume tolling operations at the toll gate.

Falana who is also the interim chair of the Alliance on Surviving Covid 19 and Beyond (ASCAB), has also demanded for the immediate release of protesters arrested by the police at the Lekki tollgate in Lagos.

In a statement on Saturday, Falana said ASCAB had confirmed the arrest of not less that 20 youths who were planning to take part in a peaceful protest at the tollgate.

He said the fundamental rights of the protesters were crudely breached, and demanded for their immediate release.

“By arresting the protesters instead of providing them with adequate security the Police engaged in a provocative contravention of section 83 (4) of the Nigeria Police Act which states as follows: Where a person or organization notifies the police of his or its intention to hold a public meeting, rally or procession on a public highway or such meetings in a place where the public has access to, the police officer responsible for the area where the meeting rally or procession will take place shall mobilize personnel to provide security to provide security cover for the meeting, rally or the procession,” the statement read.

“ASCAB calls on the Lagos state commissioner of police to ensure the immediate and unconditional release of the protesters because they did not commit any criminal offence by exercising their fundamental rights to freedom of expression and assembly guaranteed by sections 39 and 40 of the 1999 constitution of Nigeria.”

Thousands of people took to the streets last month in anti-police protests. The demonstrations climaxed on Oct. 20 when security forces opened fire and killed at least 12 protesters in Lagos, according to witnesses and Amnesty International. The army and police have denied the killings.

Mr. Macaroni has recounted his experience with the Nigerian Police after he was arrested