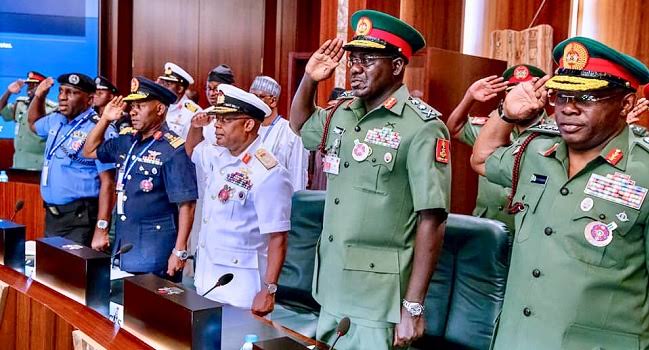 The Presidency has distanced itself from allegations that it was lobbying the Senate for the confirmation of the appointments of immediate past Service Chiefs as Ambassadors.

The Senior Special Assistant to the President on National Assembly Matters (Senate), Senator Babajide Omoworare said this in an interview with journalists

He said that the Presidency was not aware of the use of lobbying from any quarter to get the appointments of the erstwhile service chiefs confirmed in the Senate.

The President in the letter of request, said: “In accordance with section 171 (1), (2) (c) & sub-section (4) of 1999 Constitution of the Federal Republic of Nigeria as amended, I have the honour to forward for confirmation by the Senate, the under-listed five (5) names of nominees as Non-Career Ambassadors-Designate.”

The President’s request stirred a country wide controversy as some political commentators including the Senate Minority Leader, Enyinnaya Abaribe, decried the nominations by describing them as reward for failure or non-performance.

However, in his remarks, Senator Omoworare explained that lobbying in governance between the executive and the legislature and vice versa, is normal and practised in all democracies.

He said: ” I think if anybody says there is any lobbying going on as regards nominations of former service chiefs for Ambassadorial appointments by Mr President, I am not aware.

“But if there is lobbying going on for them to pass through the Confirmation process, I sincerely think it is in order, it is not an aberration, it’s not a transgression, it’s not a sin for lobbying to occur.

“Having been service chiefs before should they be nominated as ambassadors especially because they Senate and House of representatives have not been on the same page with them, it is normal.

“That does not mean they can not be successful Ambassadors. It is for the Senators to determine whether looking at their profiles, their curriculum Vitae and their credentials they can be good representatives of Nigeria.

“For them to even be service chiefs it means they have attained some heights because being service chief is being at the pinnacle of their career which is an achievement”.

The Senior Special Assistant added that as cordial as relationship between the 9th Senate and the Presidency is, some requests for confirmation have been rejected without causing any ill feeling between them.

“The President must have done his homework very well on nominations of the former service chiefs for the Ambassadorial positions , which gives somebody like me the confidence that the appropriate committee of the Senate will confirm them at the end of the day ,” he explained.