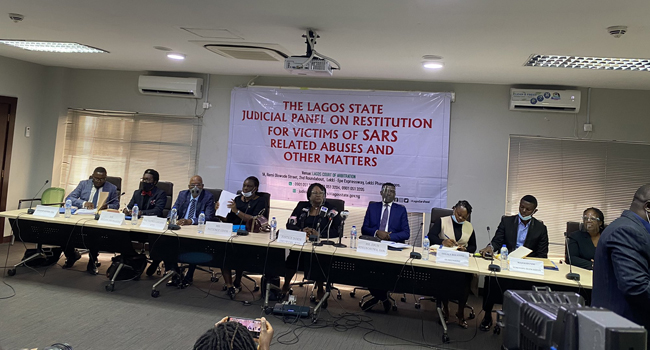 There was drama and even chaos on Saturday at the proceedings of the Lagos State Judicial Panel on Restitution for victims of SARS and other related matters following a decision on the repossession of the Lekki Toll Gate.

Proceedings degenerated into a shouting match after the Chairman of the panel, Justice Doris Okuwobi gave a ruling allowing the Lekki Concession Company (LCC) Ltd to repossess the toll gate.

Justice Okuwobi sitting with four other members of the panel listened to arguments for and against the application made by counsel to the LCC Ltd, Demola Seriki for the re-opening of the facility.

It’s the 4th time the LCC is making this application, Channels Television reports.

In his arguments in support of the application, Mr Seriki asked the panel to allow the company take possession of the toll gate plaza for the purpose of evaluating the damage done so as to be able to make insurance claims needed to effect the necessary repairs which he says will last about 2 months.

Immediately after the panel ruling in his favour, a Senior Advocate of Nigeria, EbunOlu Adegboruwa walked in with the other three members of the panel, Patience Udoh (representing civil society), Rinuola Oduola and Temitope Majekodunmi (representing the youths).

They all proceeded to deliver dissenting decisions to the effect that they were not in support of the repossession and the reopening of the Lekki toll plaza.

Akon Ikpeme sworn in as Chief Judge of Cross River