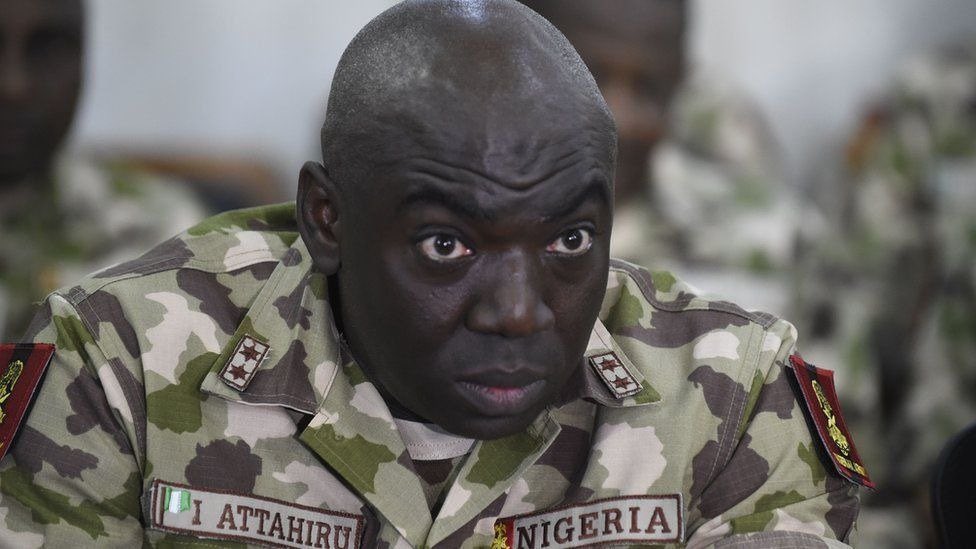 “Lannisters, Targaryen, Baretheon, Stark, Tyrell – they are all just spokes on a wheel, this one is on top, then that one, and on and on it spins, crushing those on the ground”

“It’s a beautiful dream stopping the wheel, you are not the first person who has ever dreamt it”

“I am not going to stop the wheel, I am going to break the wheel.”

This set of appointments is long, long overdue. Every reasonable person has called for the replacement of the former service chiefs for years. This fell on deaf ears as a seemingly stubborn President Buhari is one who prefers to stick to people he knows.

But not every ‘reasonable’ person has a good cause for pushing for the sack. To begin with, the immense criticism that has followed the former defence heads have been largely because of the soaring insecurity in the country. The insecurity has seen the military involved in internal security operations not seen since the civil war of 1967-1970. The lack of progress in the fight against terror and insecurity generally pitched the service chiefs against citizens. Actually, this should not even be a thing, if Nigeria is a well run, functional society. Internal security is a problem for the police and other paramilitary agencies, and equally importantly, the domestic intelligence services.

Nigeria’s security crises have reached this crescendo such that the military was involved in 35 out of 36 states in various operations with funny animal names, an aberration. Young people turning increasingly to crime because of desperate economic conditions is a recipe for disaster that the military cannot handle. A song writer asked this very important question: “how many people soldiers go kill?”

But what does it change?

I have only supported the replacement of the service chiefs on two grounds: First, it is military doctrine that whenever an officer attains retirement age, he should simply be retired. There is little sense in keeping him there. Consequences of which lead me to the second point: replacing the service chiefs should douse the flames of discontent in the upcoming leadership cadre of the military, many of whom were supposed to have taken over from the outgoing chiefs, and have found themselves retired before their senior colleagues. This is usually a recipe for a mutiny.

On the whole, it bears repeating that the new service chiefs would not perform magic. For context, the now retired Lt Gen. Tukur Yusuf Buratai, when he was a Major General was tasked with heading the Multinational Joint Task Force. By all accounts, the man was a warrior, feared by Boko Haram. He was part of the push that cleared areas previously held by insurgents in the run up to the 2015 general elections. For all his exploits the new administration of President Muhammadu Buhari appointed him Chief of Army Staff in August 2015. It has been nearly six years since that appointment. The gains made in the war against Boko Haram have largely been receded. The question is, what happened to Buratai?

What people do not understand is that against their expectations of magic, nothing will happen for the simple reason that there is a lack of political will and iron discipline needed to tackle the many problems bedeviling the Nigerian military, chief of which, is corruption. Among many things, corruption has largely stalled and frustrated the war in the North East. It has dampened morale, and sent both senior and junior officers to their early graves. If the new service chiefs are not ready to purge corrupt elements within the leadership brass, we would be well to make do with the initial gra gra of the first few months and then relapse into the old state of nature, where life is nasty, brutish and short.

Largely, what Buhari has done with this new set of appointments, is setting up the new guys up for failure. In September 2020, National Security Adviser, Babagana Monguno, to cover for the failings of his fellow officers in the military, told us that Buhari is set to rejig the national security architecture. I, for one, expected too much, only to see it become a pipe dream. I beat myself up daily because I should have known that the same NSA who released a national security strategy handbook at the end of 2019 with nothing to show for, would have no business having the capacity to institute such architectural reforms.

In Daenerys’ attempt to break the wheel, she somehow became that wheel, but in Nigeria’s case, whatever ideas of salvation we might have concerning our sorry security situation, the new service chiefs are not our Christ. They are–for all intents and purposes–new spokes in a tired, deadly wheel.

Macharry is an analyst with SBM Intelligence

Fredrick Nwabufo: Abuja under siege by bandits, but DSS, army after agitators in south-east