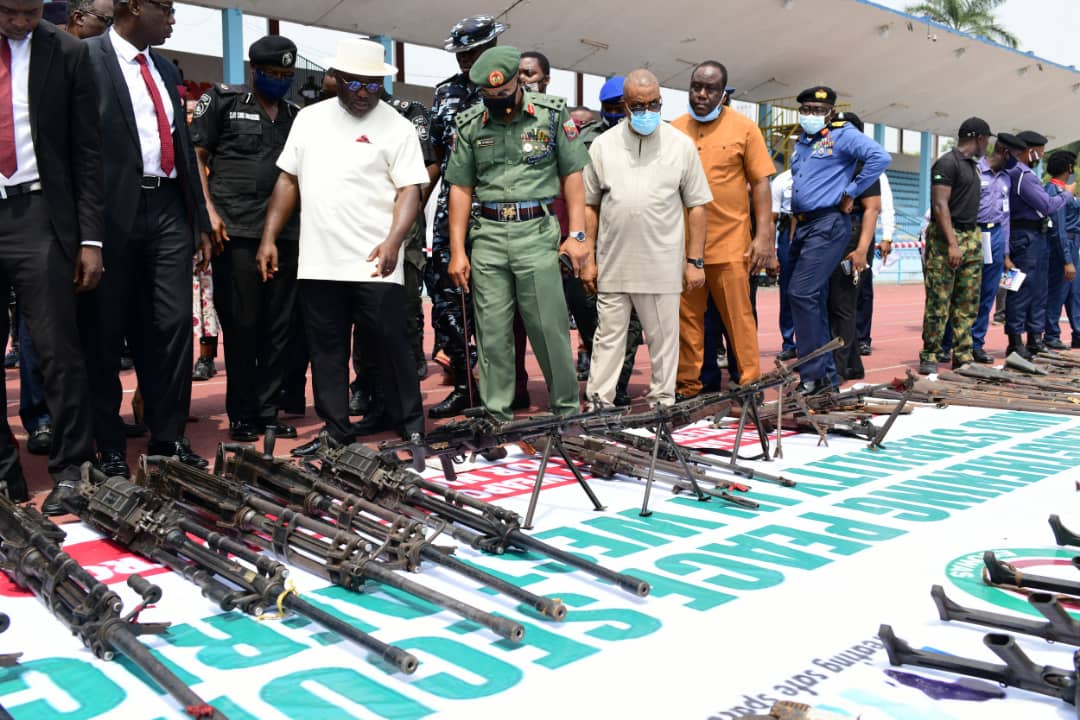 The Cross River State government, today Monday, 25th January, 2020 destroyed arms and ammunition surrendered by criminals at the flag off of the Ecowas-European Union Arms destruction exercise in Calabar.

A total of 260 arms and 5510 ammunition, surrendered by the dreaded Bakassi strike force and Khaki boys were destroyed at the ceremony that held at the UJ Esuene Stadium,Calabar.

Governor Ben Ayade who called for the inclusion of the Bakassi strike force into the Amnesty programme of the federal government, said the group has since surrendered their weapons since 2018 but regretted that “up till now, they are waiting to be enrolled into the Federal Government Amnesty programme

“I would prefer that we find a way to find an alternative job for them. Let the entire members of the Bakassi Strike force and the Khaki boys be included in the amnesty program of the Federal Government of Nigeria”, Ayade said.

Ayade lamented that with over 32 immigrants routes in Cross River, the state has became a veritable source for harvest of arms and harvest of young men.

He therefore, appealed to the federal government to give the state special consideration in terms of financial assistance.

Earlier, Joel Bisina of Lite-Africa who represented Ecowas-EU at the event stated that the arms destruction was part of the mandate of the Presidential Committee on Small Arms and Light Weapons.

He commended the governor for strategically facilitating the voluntary surrender of the arms by the militants.

On his part, Special Adviser on Amnesty and Rehabilitation to Governor Ayade, Mr. Austin Ibok, said the Presidential Committee on Small Arms and Light Weapons was established by EU and ECOWAS as a program to provide an alternative livelihood to youths in Cross River, with emphasis on ex-agitators, such the Bakassi Strike Force, the Boki Freedom Fighters as well as ex-cultists, who had denounced their membership of various confraternities.

State Governors meet with Miyetti Allah in Akure; here are some of the resolutions reached