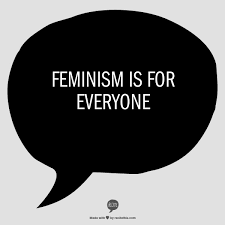 It is not unheard of for ordinary citizens to suddenly find themselves in the thick of a campaign for a better society, and that is the case for Amarachi Nickabugu, a female student of the Nigerian law school who has been using her Twitter account to highlight laws rooted in misogyny under the #everydayfeminism.

“So many times, I have seen or heard people make statements insinuating that gender inequality does not exist, or is not as bad as it is made out to be. If I say for instance that women are discriminated against in politics, someone would say, ‘what is stopping women from joining politics. You people are the ones holding yourselves back.'” She told me.

“Statements like that continue to downplay and dismiss the problem of gender inequality in Nigeria. A lot of people do not know or refuse to acknowledge that our social norms and a good number of our laws in this country are genders discriminatory.” She added.

On why she chooses to embark on the campaign that has now be on for over a year; “Recently, I pointed out to someone that beating one’s wife is permitted by law in certain parts of Nigeria and the person said I didn’t know what I was talking about. I think that was the final conversation that inspired me to start listing gender discriminatory laws from across the world.”

Amarachi, a graduate of the University of Nigeria, Nsukka said when she started the campaign, she knew about fifty laws that discriminated against women, but she is still shocked by the sheer amount of laws that exist just to hold back women.

“What surprises me is not just that these laws are so many, but that they are everywhere. Finding out that child marriage is permissible in almost all the States in the United States was the first surprise.”

On whether her campaign will not be labelled as ‘social media noise’, Amarachi has this to say; “I am confident I am making an impact.
I am very familiar with the thinking that advocacy on social media is ‘just social media noise.’ As a feminist, I have had people say that to me several times. What people who think like this easily forget to mention is that the reason they know most of what they think they know about gender equality is because feminists and like-minded people are ‘making noise’ about it on social media.

“Here, no teacher in a Primary School ever took a marker and wrote ‘Gender Equality’ as a topic on a classroom board. Gender equality is not a subject in Home Economics or Social Studies. In fact, what is taught in our schools is the opposite of equality.

“Yet, women and girls from every corner of this country are becoming increasingly aware of their rights as human beings. Most people’s first encounter with words like ‘feminism’, ‘gender equality’ or ‘sexism’ was on social media and in conversations with their peers.

“So, whether or not these discussions on social media are appreciated, we cannot make progress without having these conversations.” She said.

On how the campaign will end, Amarachi who is already on day 246 (as at January 23, 2020) said, “I am certain that one day, I will tweet the last hashtag #everydayfeminism on that Twitter thread. For that thread, that will be the end. I am not sure when but definitely, it will happen.”

Come back with laptops, Ipad, smartphones for e-learning – UNICAL to returning students