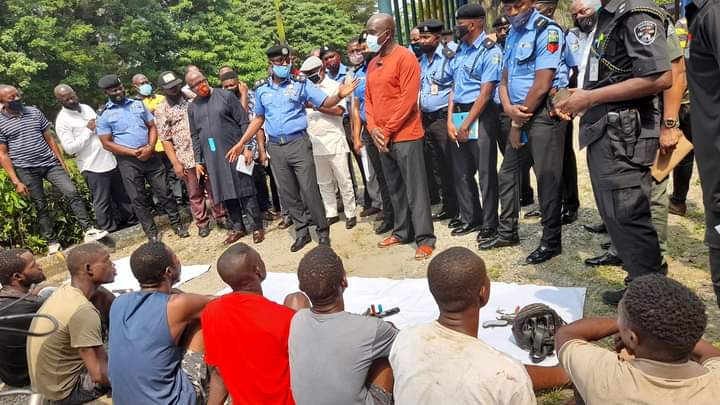 Ajah Chinonso, a suspected rapist arrested by the men of the Nigerian Police Force, Cross River State Command has revealed that   he raped his victim after spending money on her and she turned down his request for sex.

Ajah was arrested alongside his friend, Udie Augustine, who is alleged to have assured him in planning and executing the crime.

“I raped her only once because she has been eating my money and refusing to give me sex,” he said.

Parading the suspects at the Police Headquarters in Diamond, Calabar, the Cross River State Commissioner of Police, Sikiru Akande, said the suspects will be charged accordingly and made to face the full weight of the law.

The Cross River Police Chief told journalists that the suspects were arrested on January 17, 2021, in Ikom local government area after they had raped their victim (name withheld) and made away with her phone.

He said that the suspects, who forcefully had carnal knowledge of the girl stole her phone and we’re about selling it when they were apprehended.

Akande, who was only recently deployed to the state as the Commissioner of Police, said he has put in place actionable plans to strengthen police-public relationships and tackle criminality in the state

“I am not a stranger in Cross River. To this end, the security situation in the three senatorial districts has already been taken note of.

“It is imperative to let the public know that I am in town strictly to ensure the security of lives and property, as such, the command is going to wage relentless and serious onslaught on criminals across the state.

“We have created a robust intelligence network/platform with members of the public and private individuals and confidence-building processes that will ensure the economic and social development of the state.

“I urged you all to support and strengthen the Police with useful information without fear of molestation or betrayal to perform their constitutionally assigned role in our dear state”, Akande said.