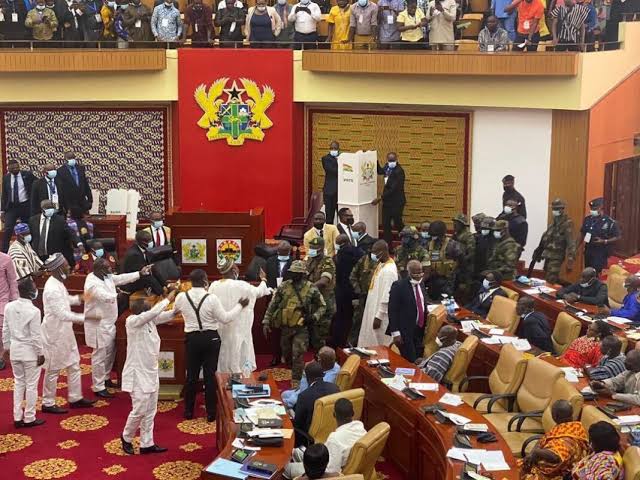 A series of videos circulating on the internet have shown parliament members from Ghana exchanging blows during the dissolution of the 7th parliament.

In the footages, Members of the Minority wearing white stormed the chamber seeking to occupy the majority side of the House in furtherance of their claim of winning the Majority. And another one showed NPP MP-Elect for Tema West, Hon.Carlos Ahenkorah snatching ballots from the chamber and running away with it.

The incident happened over the close number of members between the two parties in the senate – while the New Patriotic Party, NPP has the majority in parliament with 137 seats; the National Democratic Congress, NDC has 136 seats.

The speaker was to be elected by secret ballot, but MPs from the ruling New Patriotic Party(NPP) party kept displaying their marked ballot papers, to the displeasure of opposition MPs.

At some point a ruling party MP snatched the ballot papers while voting was still underway, sparking a confrontation.

Armed police and troops temporarily stormed into the chambers to restore calm.

Both the opposition and the ruling party have 137 MPs each, plus there is one independent MP..

A court had issued an order barring one opposition MP from voting for the speaker pending the determination of a challenge on his election. But he was somehow allowed to cast a vote.

The opposition has described last December’s general election as flawed and has filed a challenge at the Supreme Court seeking annulment of the presidential election.