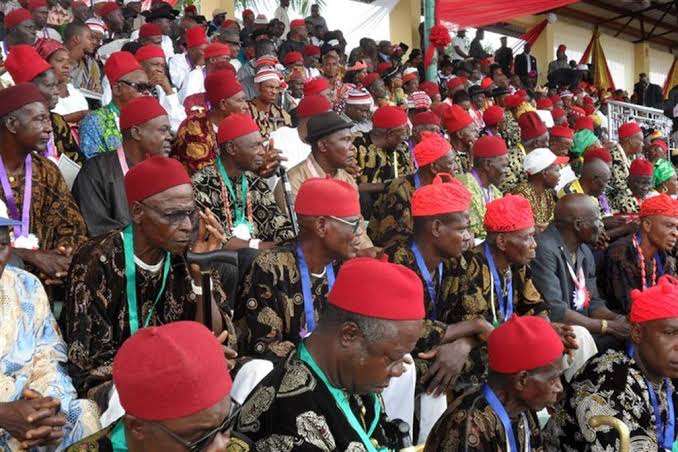 “C’mon Frankie… my father did business with Hyman Roth, he respected Hyman Roth.”

So here is the thing about these 2015 conversations that many appear to have refused to move on from. They ought to be a teachable moment, but sadly, many do not seem to be learning much. Instead, too many people from my neck of the woods (SE/SS) keep insisting on what I consider to be narratives that won’t stand proper scrutiny.

Yes, it is undeniable that there was an element of ethnic chauvinism/supremacy in the coalition that came together against Goodluck Jonathan, but to attribute his loss simply to that factor is to completely miss the lessons of 2015, and as a result, set yourself up for another failure. Simply because you are being emotional.

I’ll talk about two of these:

First, Benue. In 2015, Benue state voted for Muhammadu Buhari. No one within the set of people who keep shouting about ethnic jingoism ever seems to ask themselves why. There are/were two reasons: first, Gabriel Suswam’s government was really bad. As of January 2015, the state owed workers almost a year in salaries, and he never got as much as a reprimand from Abuja. Instead, he was mollycoddled. Then there was the herdsmen matter, which was in Benue especially, already a crisis that culminated in the governor being shot at in 2014. Many people looked at those, then looked at the alternative, and decided (wrongly in hindsight but that is another matter), that the alternative may serve their interests better. People were fed up to put it in simple terms, and the 2015 vote, which was close for the record, was a major protest. I’ve not even talked about David Mark and how his very longevity and perceived detachment came to be a problem for the PDP in his senatorial district. To now reduce those decisions to the effects of “an ethnically driven PR campaign” is to do those people a disservice.

But the bigger disservice is to the South-West geopolitical region. Many of the people who shout about an ethnically driven agenda by Yoruba people against GEJ have probably never taken a look at Nigeria’s voting patterns, at least since 1979. For all their faults, and there are many, accusing the South-West as a bloc of pursuing an ethnic agenda in national elections doesn’t really stand up to scrutiny when you look at the numbers, and persisting with this accusation risks alienating people we should be having more constructive engagements with. For the record, I have looked at the numbers for all the elections since 1999 (2007 weren’t included), and the South-West, in actuality, always has the biggest split of Nigeria’s geopolitical zones. The only time they came close to voting as a bloc was in 1999.

The pic below shows the breakdown of votes by GPZ in 2015.

Interestingly, it was the South-West and the North-Central that coincidentally had similar split voting patterns, which speaks to regions where the ruling elite do not dictate to the generality of the population. Both the NC and the SW had voting ratios of 4:3 in favour of Buhari back in 2015. The corresponding ratios for the SE and SS were 13:1 and 11:1 in favour of Goodluck Jonathan, while for the NE and NW, the ratios were 7:2 and 5:1 in favour of Buhari. This indicates a strong herd mentality in the latter four regions, but even worse in the South-East and South-South. Should it not be something we honestly want to discuss amongst ourselves?

It is important, at this point, to note that a herd mentality eventually leads to the need for a Messiah. It is a herd mentality that made so many people in the North so sure that Buhari was mai gaskiya who would come with a magic wand and solve all the problems. I won’t dwell, here, on the growing effects of the seeming emergent herd mentality in the East…

For the record, this voting pattern has repeated itself since 1999. Now, being from that area, I know that a herd mentality is the last thing people have there, so what it tells me is that there is something more untoward going on, and people need to ask themselves why that mechanism failed in 2015, but that is not the main thrust of this piece…

In June 2016, I wrote about the emergence of a Mason-Dixon line in Nigeria and pointed out that for the foreseeable future, at least electorally, the NE/NW will be diametrically opposed to the SE/SS. These two regional blocs are geographically contiguous within themselves, so it is not surprising. Neither is it a bad thing to have opposed interests. It is how to bring those interests together that counts, and this is where my people are dropping the ball.

It is clear, following the disaster that the Buhari government has been, that the interests of the SE/SS are aligned with those of the NC and the SW, Nigeria’s swing regions. This is where wise politicking comes in. How do we, without the emotional blackmail of accusing people of a tribalism that does not really stand up to scrutiny, make the alliances that we need to advance our interests?

We, for example, have the common interest of weakening Abuja.

For the Igbo people of Nigeria, I believe that our interests are best served if we have an alliance with the South-West. With the South-South we already have a relationship that is both fractious and familial. We have to manage it properly, which brings me to the conversation from The Godfather Part II, which I started this piece with. With the South-West, what nd? Igbo need is an alliance, one that is defined by our interests. We have been hurt by the poor Buhari economy. The Buhari economy has also hurt the South-West, and even though many won’t admit it, their treatment by the North has also hurt their pride.

Unfortunately, too many of our people have remained emotional in this matter, and are choosing to focus on, once again, an ethnic angle that at best does not stand up to scrutiny, and at worst, only a percentage of the South-West is guilty of. Do we have to love the South-West to make an alliance with them? No. Do we have to trust the South-West to make an alliance with them? No. We have to focus on our group interest, which is for the short to medium term at least, aligned with theirs, how to get the greatest number of our people out of poverty and into prosperity. Given that the South-West clearly has differing, and in many cases, seriously opposed factions none of whom is dominant as the numbers (even from 2019) show, how can we rather than antagonise them, come into an alliance with them to advance the interest of the Igbo man, which is to have a stable and growing economy in which to sell market?

Related Topics:Cheta Nwanze
Up Next

Victor Ejechi: The relationship between economics and politics in Nigeria