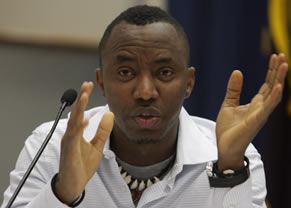 The Socio-Economic Rights and Accountability Project (SERAP), a rights advocacy group, has called on the Nigerian police to release the publisher of Sahara Reporters, Omoyele Sowore, and some other activists in their custody.

The group also threatened to sue the police if the activists are not released within 48 hours.

The statement issued Friday reads, “BREAKING: Nigerian authorities must immediately and unconditionally release Omoyele Sowore & other activists reportedly arrested and tortured during a peaceful protest last night in Abuja. We’ll take legal/international action if Sowore & others are not released within 48 hours”.

Mr Sowore was arrested on New Year eve for leading a protest in the Federal Capital Territory (FCT), Abuja against bad governance in the country.

Multiple acounts suggests that the Saharareporters publisher and others arrested were taken to Abattoir police station in Logokoma, Abuja, where they are currently being detained.