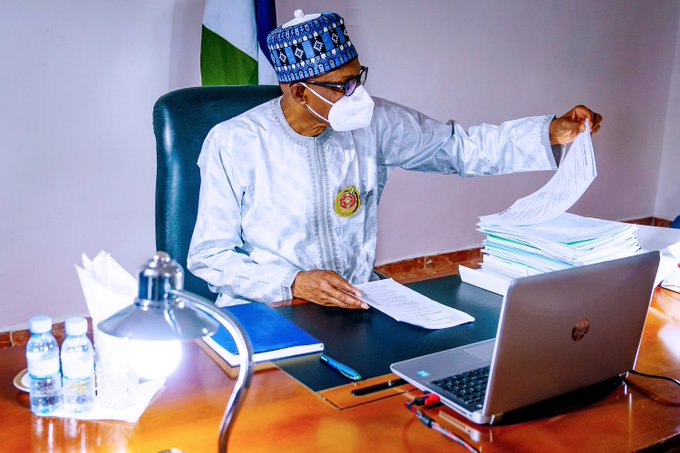 The presidency has on Wednesday alerted Nigerians over the plot of some disgruntled political elements to smear the administration of President Muhammadu Buhari’s administration.

The Presidency made this claim through a statement issued by the Special Adviser to the President on Media and Publicity, Chief Femi Adesina in Abuja.

The statement said that this alleged smear campaign is aimed at portraying Buhari as not being the one in charge of the country.

It also said that the campaign involves some online media who are being induced with money to cook up unsubstantiated allegations to sow seed of discord and discomfort in the country.

The Presidency further assured Nigerians of the commitment of the president to serve the country to the best of his ability and bring change to the country.

The statement reads: “The general public is hereby alerted to a smear campaign in the works against Mr President and his office, by disgruntled political elements in the country, who have been shopping for pliant online media that will serve as accomplices in their nefarious act.

“The game plan is to launch an orchestrated campaign of calumny in the days ahead, in which President Muhammadu Buhari would be portrayed as not being in charge of the country, a narrative already started from a procured offshore medium by the instigators.

“Money and other attractive inducements are being dangled before the online media, and some of them are already complicit, cooking up stories with jejune and unsubstantiated allegations, all to sow seeds of discord and discontent in the country.

“Nigerians are urged to be wary and discerning in what they consume as news and special reports from such online media, as they are in cahoots with agents of destabilization, seeking ultimate political gains.

“President Buhari remains focused and single-minded in his determination to serve the country to the best of his ability, bringing change to different facets of our national life.

“This is already evident in infrastructure as seen in roads, rail, bridges, airports, and many other strides round the country. Agriculture is another worthy testimonial.

“The fight against corruption, insecurity, and retooling of the economy also proceeds apace, and the Buhari Administration will not be distracted, and will continue to serve with heart and might, irrespective of all shenanigans.”

MURIC felicitates with Christians, urges security operatives to be vigilant during Yuletide