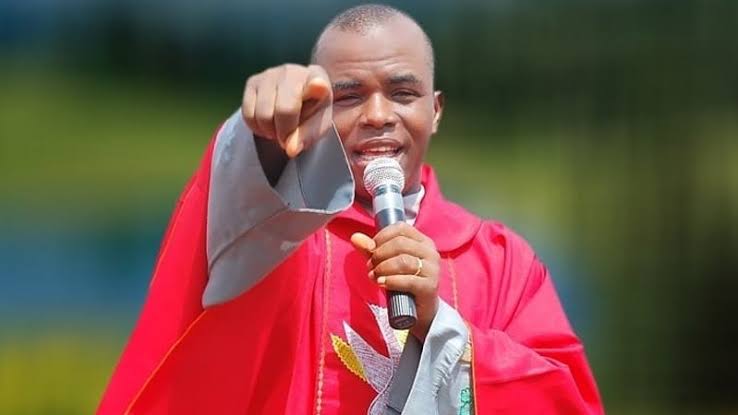 Nigerian Catholic Priest, Reverend Father Mbaka and some of his church members on Wednesday evening allegedly attacked two BBC reporters, their driver and others in Enugu State.

According to reports from the BBC, the journalists alongside Reverend Obiekezie had gone to Father Mbaka’s church, Adoration Ministry for an interview around 10am. The interview could not hold because Father Mbaka was preaching.

The journalists then went to Father Mbaka’s house to hold the interview. On getting there, they were suddenly surrounded by 20 men who seized their equipment and promised to kill them for writing negative reports about Mbaka.

Obianinwa, one of the journalists who narrated the incident said, ” Mbaka asked us to wait till the end of the programme for the interview. The men outside the house said BBC Igbo write negative things about Mbaka and start to beat Nnamdi, Solomon and Ndubuisi. They give them heavy blows on their heads and all over their body.”

When Mbaka heard the noise, he came out and started to put his hands in Obianinwa’s face.

“When the men saw Mbaka, they increased their intensity of physical attack and abused the reporters. Mbaka then asked his men to seize the phone and cameras of the reporters. His men say they will kill the reporters and nothing would happen. They removed my wig, tried to strangle Nnamdi. Rev Obiekezie told them to stop, but they attacked him too and seized his phone” Obianinwa added.

The beating continued until Obianinwa said the world would know they died at Mbaka’s house.

Obianinwa said, “At that point, Mbaka asked the reporters to leave before the men killed them. He asked his men to return the reporters equipment and chase the reporters out of his compound. His men followed the reporters until they left the state to seek medical assurance and police help”

Reverend Father Mbaka is the Spiritual Director of Adoration Ministry, Enugu, Nigeria. His number was switched off when the BBC called him for a reaction.

Related Topics:Reverend Father Mbaka
Up Next