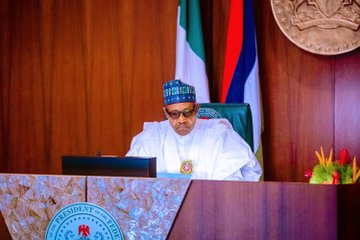 President Muhammadu Buhari on Tuesday told the quarterly meeting of the National Security Council (NSC) that he will not allow a repeat of the #EndSARS protests that culminated in the destruction of properties in the country recently.

The Minister of Police Affairs, Muhammad Dingyadi, disclosed this while briefing correspondents at the end of the meeting presided over by the president at the presidential villa, Abuja.

He explained that in vowing to do everything within his power to prevent a reoccurrence of the protests, the president assured that he will carry all stakeholders, including the youth, along in the process of maintaining peace in the country.

Asked whether it would include a crackdown on potential protesters, the minister replied: “On the issue of #EndSARS that you have raised, what we are saying is that the government will continue to dialogue, it will continue to listen and will continue to carry all stakeholders along in ensuring that there is no repeat of what happened that destroyed a lot of properties, public and private, individuals in this country.”