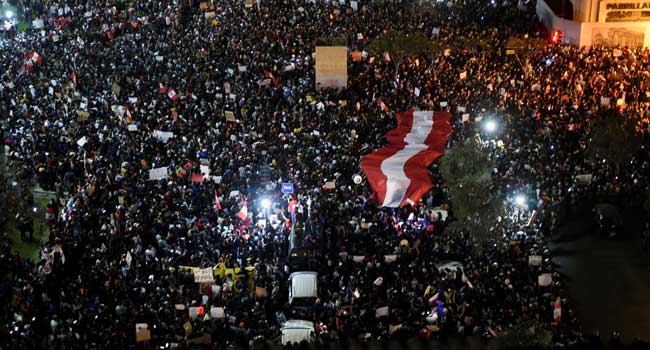 Peru’s President, Manuel Merino resigned Sunday, just five days after taking office, sparking celebrations in the capital Lima following street protests against him and the ousting of his popular predecessor.

“I want to let the whole country know that I’m resigning,” Merino said in a televised address, a day after a police crackdown on protesters left at least two people dead.

Merino, 59, resigned shortly after a crisis session of Congress called on him to quit power before 6:00 pm (2300 GMT) or face censure.

Congress is expected to appoint a new president — the South American country’s third in a week — in a new session called for 6:00 pm.

Thousands have taken to the streets in days of protests against Merino following the ouster of his predecessor Martin Vizcarra, who was impeached on corruption allegations on Monday.

Congress’ ultimatum came after the health ministry said two protesters were killed on Saturday during a massive and peaceful march in Lima, which was repressed by police firing shotgun pellets and tear gas.

Merino said that in order to avoid a “power vacuum” the 18 ministers he swore in on Thursday would temporarily remain in their posts, though almost all had resigned in the wake of Saturday’s deadly protest.

The resignation was greeted by noisy celebrations in Lima, with demonstrators taking to the streets sounding horns and banging pots.