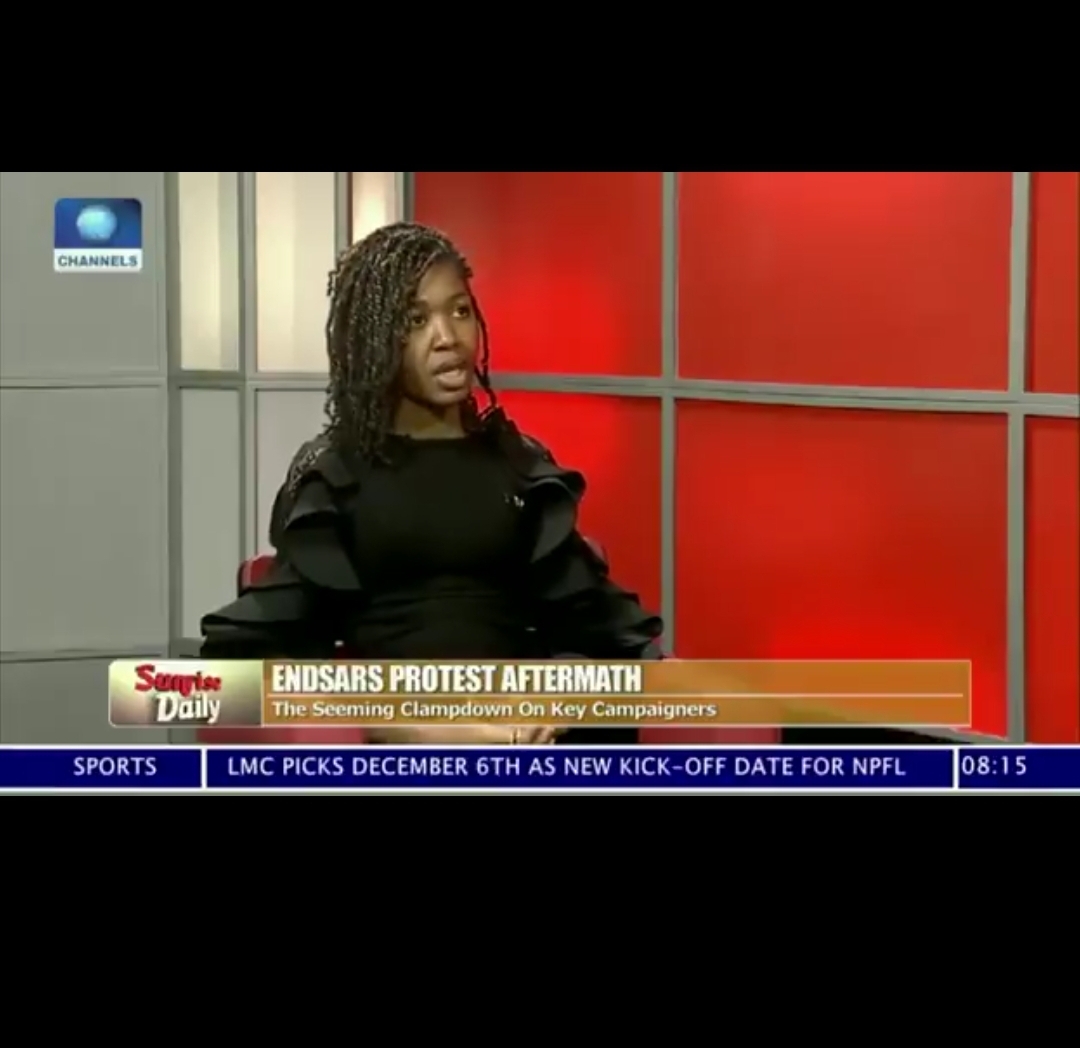 Sister of arrested EndSARS protester has said that the Police accused her brother of fraud when he was arrested.

Eromosele Adene, a 27-year-old musician and philanthropist was arrested on November 7, for allegedly inciting the public against the government due to his involvement in the recent EndSARS protest where thousands of Nigerian youths marched against police brutality and the rogue SARS unit.

The sister, Onomene Adene said that the Police alleged that her brother, Eromo had transacted business with them (the Police officers) and failed to send them the commodity.

She disclosed this today, Tuesday while speaking in an interview with Channels Television’s Sunrise Daily.

Onomene said the story looked fishy as her brother was not a businessman, but there was nothing she could do as the Police officers had already used her as a bait to get to her brother.

She said the Police never told the family or the lawyer that his arrest was linked to the EndSARS protest until he was detained.

Onomene said, “on Saturday, the 7th, I got a call some minutes past 7 am from a man he said he was a former church member. He said he had gone to our church which was at GRA, we moved just before the lockdown to Ipaja. He said he was an old church member and he went to our church in GRA and discovered that we were no more there but he had a parcel for my dad who was the Pastor of that church. He said that seeing we were no longer there, he came to Allen where we stayed. I thought it was fine. “

“(When we met) I noticed that I couldn’t really place his face but I was like ok, benefit of doubt, I might not know everyone in my father’s church, I got close and the parcel he was holding doesn’t really look like a parcel, so I already knew there was something wrong. So I asked how can I help you and next thing he said he was looking for Peter, that is my brother’s name.”

“While I was asking why he was looking for Peter, the next thing I heard was here are my men. When I looked back, there were three other men, so I was surrounded by four men. He said he was looking for Peter, they did business with him, they transferred money to his Zenith account and he did not deliver the commodities. I was like my brother doesn’t sell anything, my brother is a musician, he is a philanthropist, he is the owner of belleful Naija, he takes care of the less privileged. So you saying he bought something and didn’t pay, I knew it was some cooked up story.”

“(So when I pressed about why he was looking for my brother), three Hilux pulled up with the oga that led them, CP Hamzat and all of them were shouting madam why are you delaying? They asked me to get into the car but I didn’t want to get into the car, I just told the guy that called me that my house is not far and we should walk.”

“So they deceived me to get to my brother.”

“When they got to the house, they were still telling the story of how they bought a commodity and he did not deliver. And even when the lawyer came in, the lawyer still asked them if they were there to effect an arrest, they said no and still took my brother away that same day.”

“They told the lawyer that same story. I knew it was not true. But when they got to the station, they now said it was because of the EndSARS protests.”

When asked about the role her brother played in the EndSARS protest, Onomene said that he was like every normal Nigerian. He was not a planner or organiser.

“He is a normal Nigerian, he is a normal youth. He is not a promoter , he is not a convener. We have seen different stories, different headlines out there , he is like every normal person. His pictures are out there, he was on the floor with people who slept at the Alausa branch. If he was a promoter, a convener or anything big, they would have given him some level of comfort.”

In the same programme,  Eromo’s Legal representative, Babatunde Jinadu corroborated the story of the sister and stated that the Police lied about the purpose of the arrest until they later revealed he was arrested for inciting the public against the government.

The lawyer said that the Police unlawfully denied Eromo bail.

The government has in recent weeks clamped down on several persons who played a prominent role in the #EndSARS protests which sought to end police brutality.