The Inspector General of Police, Mohammed Adamu, has charged the Police Force to deploy all ‘reasonable force’ to protect lives and property.

He gave this directive to Police officers in a press statement issued on Saturday by the Force Public Relations Officer, Frank Mba and made available to NewsWireNGR.

In the statement, Adamu commiserated with the Police officers and urged them to maintain their high-level of professional conduct and civility despite targeted attacks that cost the lives of 22 Police officers and 205 police stations across the country.

The IG charged the Police to protect lives, private and public assets from any violent person or group operating under any guise and, trigger section 33 of the constitution if there is an attack on police facilities and private property.

The statement reads in parts, “in line with Section 33 (1) & (2) of the Constitution of the Federal Republic of Nigeria 1999 (as amended) which among other things provides for the use of such force as is reasonably necessary”.

“(a)For the defence of any person from unlawful violence or for the defence of property; (b)In order to effect a lawful arrest or to prevent the escape of a person lawfully detained; or (c)For the purpose of suppressing a riot, insurrection or mutiny”.

According to Section 33, (2) states ‘A person shall not be regarded as having been deprived of his life in contravention of this section, if he dies as a result of the use, to such extent and in such circumstances as are permitted by laws of such force as is reasonably necessary –

While he acknowledged that Section 33 (1) grants the right to life, he said that any form of attacks on Police facilities, public and private assets, and any life-threatening assault on police personnel and citizens denies individuals that right to life.

This directive comes on the back of the hijacked EndSARS protest that cost 51 civilian and 22 Police officers fatalities. 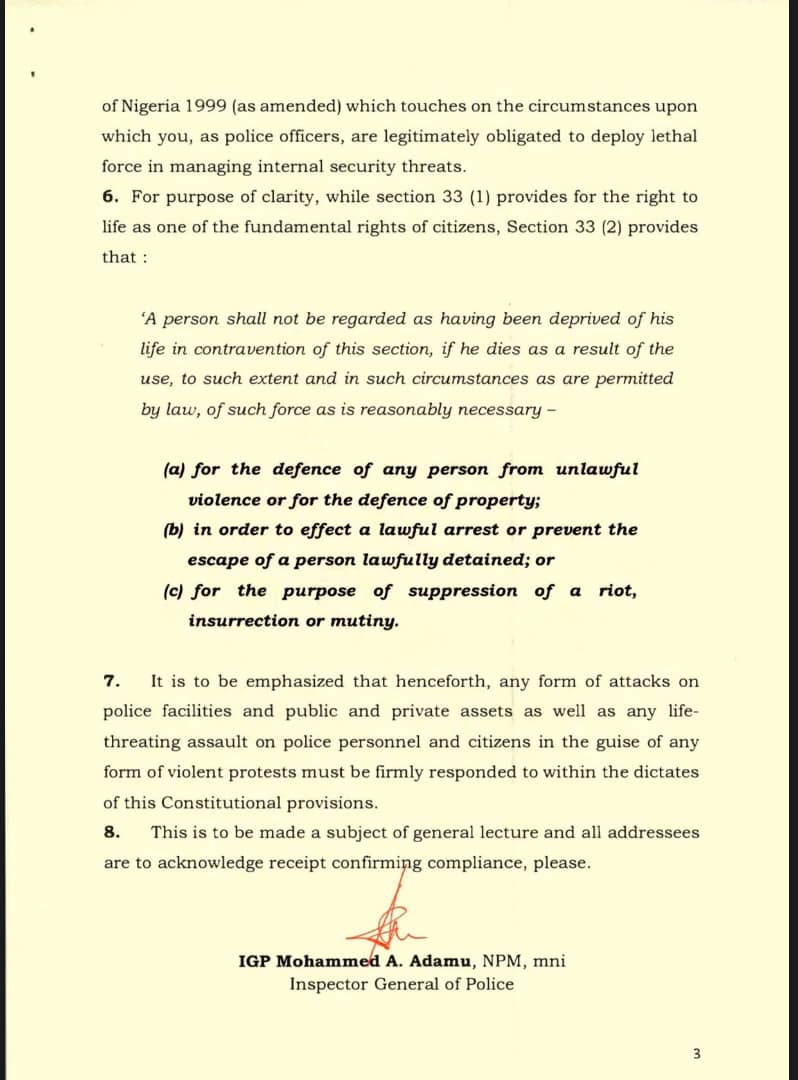 The IGP affirms that the Force will not tolerate a repeat of the horrendous attacks and killings, arson and wanton destruction, and looting of public and private assets witnessed during the recent violent protests in some parts of the country.

He warns that the Force shall deploy the full weight of the law and legitimate force (if necessary) in preventing a reoccurrence.

Thousands of Nigerians march across cities to demand an end to the Special Anti-Robbery Squad, or SARS, a police unit accused of extrajudicial killings and abuses.

The Police Command in Katsina State has confirmed the...

Vice President, Yemi Osinbajo has expressed  worries over the...

The Police Command in Katsina State has confirmed the...

Vice President, Yemi Osinbajo has expressed  worries over the...