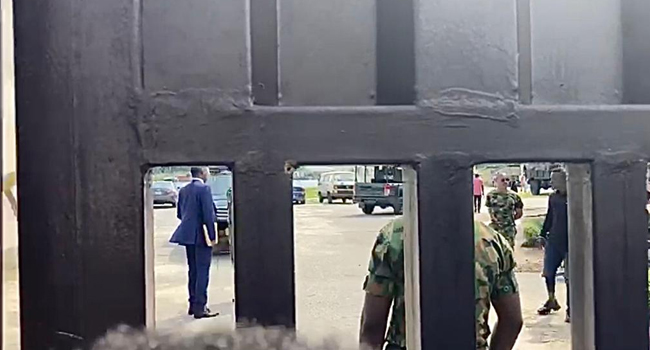 The Lagos State Judicial Panel of Inquiry and Restitution set up to look into brutality and high-handedness by the now-disbanded Special Anti-Robbery Squad (SARS) unit of the Nigeria Police Force Friday, visited the Military hospital in Falomo, the Ikoyi area of Lagos State.

Members of the panel also visited a morgue inside the hospital. They were initially denied access but later allowed into the premises after about 30 minutes.

The visit was shortly after the panel went for an inspection at the Lekki Toll Gate and to make more findings concerning last week’s shooting incident.

Led by Justice Doris Okwuobi (Rtd.), the panel which also included youth representatives, Rinu Odulala and Temitope Majekodunmi, interrogated the tollgate officials about the condition of their security cameras and other equipment.

While taking the group round, the Managing Director of the Lekki Concession Company, Mr Yomi Omomuwansa, said most of their equipment were damaged by hoodlums who set it ablaze – an aftermath of the shooting.

Today’s meeting is the second since the panel was inaugurated on October 27.

Earlier, members of the panel had visited Lekki Toll Gate. They were at the scene for inspection and to make more findings concerning the shooting which occurred on October 20, 2020.

Led by the Chairman, Retired Justice Doris Okuwobi, the panel is interrogating Lekki Tollgate officials about the condition of their cameras and other equipment.

The Managing Director of Lekki Concession Company (LCC), Mr Yomi Omomuwansa while taking the panel round the facilities said most of their equipment were damaged as they were set ablaze by hoodlums following the shooting of EndSARS protesters at the toll gate.

“They said, Let the baby die” – Lady who lost her baby detained by SARS, narrates ordeal to lagos Judicial panel